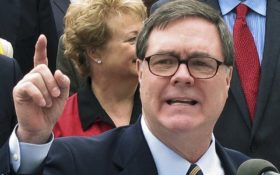 Rep. Denny Heck, D-W.A. announced late last year that he is retiring from Congress at the end of his term, saying his work on the impeachment of President Donald Trump has “rendered my soul weary.”

It was a surprising announcement because Heck was seen as a rapidly rising star in national politics — but what Heck decided to do next was even more stunning.

“For more than four decades, Heck has been a pillar of Washington’s political elite. He won election to the state House at age 24, where he served as majority leader. He became chief of staff to Gov. Booth Gardner (D) and later founded TVW, Washington’s version of C-SPAN,” The Hill wrote, citing Heck’s rising political star.

“Heck’s influence was such that, when Washington won a new congressional district after the 2010 census, Democrats and Republicans drew the new seat with him in mind. The dean of Washington’s political press corps dubbed it the ‘Denny district,’ a moniker Heck still hates,” The Hill continued.

Should Biden win the election, it’s considered very likely that Inslee would be asked to join the incoming White House administration — leaving Heck to be quickly promoted to the governor’s mansion.

“Of course it’s running through everyone’s mind if [Inslee] gets tapped for a position in hopefully a new administration in the fall,” Cheryl Selby, the mayor of Olympia, told The Hill.

Heck “could step into that role. It’s like what you have to look at in a vice president, you have to be able to picture them in that role.”

Heck himself addressed the rumors that he was eyeing the governor’s job and said he’d be ready to take over from “day one” and promised, if that happened, he wouldn’t run for re-election.