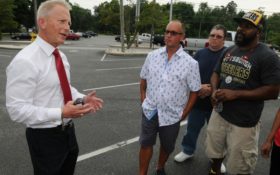 Behind closed doors, Democrats are fighting — and the ugly truth about the impeachment inquiry into President Donald Trump just leaked.

One liberal lawmaker just came forward against impeachment — and he’s not the only Democrat who feels this way.

“I would imagine I’ll be voting no unless there’s something new,” he said, when asked if he supported the inquiry.

Van Drew suggested that that the Democratic leaders are doing everything within their power to disenfranchise Americans that voted for Trump.

“Our Founding Fathers had vigorous debates of whether they would even allow impeachment in the Constitution — you don’t disenfranchise voters — millions upon millions of voters,” Van Drew said. “Voters choose their leaders in America.”

Liberal lawmakers are hoping that the vote, which is expected to take place sometime in December, will be an early Christmas gift to their voters…

But Van Drew exposed the ugly truth behind impeachment.

“There is some discussion among some of them (Democrats) quietly, privately of concern certainly,” Van Drew said. “What I’m hearing out on the street from most people is they’re kinda tired, they’re kinda worn out, they’re kinda bored and they really wanna move on.”