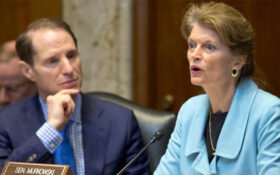 It’s not every day a Democrat has his far-Left economic policy get publicly humiliated a world-famous, super-popular, cultural titan.

It’s even less often that a leftist Democrat has his most public policy scorned by his own family.

But that day came a few days ago, and it left egg all over a Democratic U.S. senator’s face.

It’s probably an understatement to say that Ron Wyden had a bad day.

Sen. Ron Wyden, D-Ore., rolled out a radical — and almost definitely unconstitutional — policy that defies all economic logic. And he got called out for it by his own son.

Wyden’s proposal basically demands that people be taxed for money they haven’t earned.

Wyden wants to find money for massive, socialistic, wealth redistribution from the “haves” to the “have-nots.”

He’s introducing a brand new tax, but not really on income so much as wealth.

Wyden wants to tax what he calls “unrealized gains” in the stock market.

Suppose you bought a stock, and its value went up? You’d have to pay tax on every dollar of “gain” — but that’s not how things work: You only “realize” those gains when you sell the stock.

Most Americans own some kind of stock in their 401(k) plan or pension. Imagine being taxed every time the value goes up… even if you’d intended to hold onto the stock and ride it out?

You’d be taxed on all profits and left alone to absorb the losses.

Sen. Wyden says his policy will only apply to 700 people, who have at least a billion dollars in assets or who made $100 million in taxable income three years in a row. Then again the income tax was only supposed to apply to the super-rich when it was introduced in 1913… but then the government realized they could milk the American people for more and more money to fund their huge government spending.

Elon Musk took a Twitter poll asking if he should sell off a lot of his stock… something he’d have to do under the proposal. Musk pointed out that he doesn’t take a salary in his role as CEO of Tesla or SpaceX. Instead, Musk was so confident that he would succeed that he paid himself in stock, which was worth only $6 a share at the time; it’s now worth $1,222 a share. “I only have stock, thus the only way for me to pay taxes personally is to sell stock,” Musk said, and he promised to abide by the poll, which told him to sell.

Wyden shot back a smart-aleck comment: “Whether or not the world’s wealthiest man pays any taxes at all shouldn’t depend on the results of a Twitter poll. It’s time for the Billionaires Income Tax.”

That drew another comment that left the senator red-cheeked…because it came from his very own flesh and blood.

“Why does he hate us / the American dream so much?!?!?!?!” asked the Oregon Democrat’s son, Adam Wyden. “Reality is: most legislators have never built anything… so I guess it’s easier to mindlessly and haphazardly try and tear stuff down.”

Reality is: most legislators have never built anything… so I guess it’s easier to mindlessly and haphazardly try and tear stuff down.

Unlike his father, Adam Wyden knows what he’s talking about: He’s a hedge fund manager in Florida, so he trades in the stock market all day, every day.

“Thankfully, I think I can compound faster than my dad and his cronies can confiscate it…” Adam Wyden said.

Someone else who knows how things work is Sen. Joe Manchin, D-W.V., who said he’s totally against the idea, which would wreck the stock market.

Abandoned by Manchin, caught flat-footed by Musk, and spanked in front of the entire social media universe by his own kid, Ron Wyden had a terrible day.

That’s probably fair; he’s given us enough of them, hasn’t he?