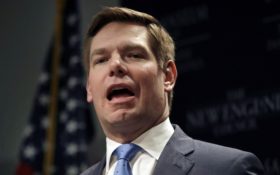 He couldn’t cut it as a 2020 presidential candidate.

So he cut the cheese instead.

Perhaps once the biggest joke of the 2020 Democratic candidates, Rep. Eric Swalwell, D-Calif., found another to humiliate himself on live TV in front of millions of Americans on Monday.

He interviewed with MSNBC’s “Hardball with Chris Matthews,” and the discussion was going along just fine — until he farted. Loudly.

Yes, you read that correctly.

Watch for yourself in the clip below:

Eric Swalwell is not a candidate that you can stand behind! #fartgate pic.twitter.com/x9MPdSfdk4

It was loud enough for the microphone to pick it up, as he attempted to slip it in between the middle of a sentence.

“Chris,” he said, “so far the evidence is uncontradicted that the president used taxpayer dollars to help him cheat… ” and here Swalwell paused and to let the gas pass before continuing, “… an election.”

But he’s adamant that it wasn’t him.

Buzzfeed reporter Addy Baird reached out to Swalwell via text message afterward to ask about what exactly went down, and Swalwell stands by his claim that he had nothing to do with the… interruption.

NEWS: SWALWELL denies it was him who farted on MSNBC: pic.twitter.com/IYmHwYfuGf

But social media users were not buying it all. The embarrassing gaffe sparked the hashtag #FartGate, which spread like wildfire across Twitter.

“Eric Swalwell is getting more coverage tonight than he got throughout his entire presidential campaign,” conservative activist Ashley St. Clair write. “All because of a fart.”

Eric Swalwell is getting more coverage tonight than he got throughout his entire presidential campaign.

All because of a fart.

One social media user had their own take on the incident, likening it to the quid pro quo that Democrats allege President Donald Trump offered Ukrainian President Volodymyr Zelenskiy.

“This is disturbing @ericswalwell needs to prove to the American people that no quid poo poo occurred during this interview. #fartgate.”

This is disturbing. @ericswalwell needs to prove to the American people that no quid poo poo occurred during this interview. #fartgate

And another social media user took things a step further, joking that House Intelligence Committee Chairman Adam Schiff, D-Calif., would open up an immediate investigation into Swalwell and blame Republicans for the mess he made.

Adam Sniff #adamsniff to launch an investigation into what @ericswalwell had for lunch, blames conservative cafeteria working for serving refried beans. #fartgate

But the showrunners behind “Hardball” cleared the air…

“Sorry to disappoint the conspiracy theorists —  it was the #hardball mug scraping across the desk. Get yours today and let’s get back to the news!” the show’s Twitter page wrote to which Swalwell replied, “TOTAL EXONERATION.”

Do you think Congressman Swalwell farted?