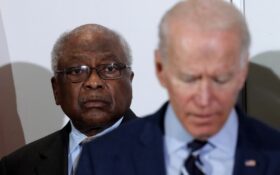 In spring 2020, Joe Biden was campaigning for president, and he was lagging behind other candidates, like Sen. Bernie Sanders I-Vt.

Then, Biden netted an endorsement from South Carolina Rep. Jim Clyburn, the third-ranking House Democrat. After that, Biden won South Carolina’s presidential primary by the double digits, and the rest is history.

Now Biden is looking to replace a Supreme Court justice… and Clyburn has another ask.

Specifically, Clyburn has been pushing for Biden to nominate U.S. District Judge J. Michelle Childs, a jurist from his native South Carolina.

Clyburn said, according to The Associated Press, “Judge Childs has everything I think it takes to be great.”

He has been stumping for Childs both in public and in private, helping to elevate her to Biden’s Supreme Court shortlist.

During Biden’s presidential campaign, Clyburn reportedly requested for Biden to choose a Black woman for the Supreme Court.

After some cajoling, Biden made the promise at a Democratic debate.

Two years later, the long hoped-for vacancy on the court finally arrived with the retirement of Justice Stephen Breyer. Biden stood by his pledge at a press conference on Friday… but he’s allegedly weighing choices other than Childs.

In addition to Childs, early discussions about a successor include California Supreme Court Justice Leondra Kruger, as well as Ketanji Brown Jackson, a former Breyer clerk who is now on the U.S. Court of Appeals for the District of Columbia Circuit. Biden is also looking at U.S. District Court Judge Wilhelmina Wright from Minnesota and Melissa Murray, a New York University law professor who is an expert in family law and pro-choice litigation.

Clyburn had a head start. He began making his case for Childs more than two years ago.

In December 2020, just weeks after Biden won the White House, Clyburn said he wrote to the then-president elect advocating that Childs be promoted from South Carolina’s federal trial bench to the D.C. appeals court. A seat on court is often seen as a springboard for Supreme Court nominees.

“Everybody says, ‘Well, that’s the way you need to go, to go to the Supreme Court,’” Clyburn said, of the appellate level. “I’ve never agreed to that, but you know, I don’t have to agree with all the rules that I have to play by.”

Last month, Biden officially submitted Childs’ name for an open slot on the circuit court. Her Senate hearing had been expected this coming week, which would have given Childs a closely watched audition of sorts, but staffers said Friday that had been delayed.

In interviews over recent days, Clyburn has argued that, if Childs were nominated, she could win the backing of South Carolina’s two Republican senators, Lindsey Graham and Tim Scott — an enticing prospect for Biden, offering the possibility of a pick that could satisfy the party and also win bipartisan support.

On Sunday, Graham, a former Senate Judiciary Committee chairman, highly praised Childs as a “fair-minded, highly gifted jurist” who would bring important perspectives to the high court if chosen.

Graham told CBS’ Face the Nation, Qualifications have to be the biggest consideration, and as to Michelle Childs, I think she’s qualified by every measure.”

A spokeswoman for Scott lauded Childs’ “respected reputation as a judge in South Carolina” and said “he looks forward to engaging with her if she is the nominee.”

Childs spent much of her career in private practice. She became partner at one of the state’s largest law firms, where she focused on employment and labor law. After several years as a state court judge, she was appointed to the federal trial bench. In 2014, she gained national attention for ruling in favor of a same-sex couple seeking to have their District of Columbia marriage recognized in South Carolina.

Unlike most high court nominees, Childs isn’t an Ivy League graduate or a former federal appellate clerk. The 55-year-old graduated from the University of South Carolina School of Law. She also holds a master’s degree from the university’s business school, as well as a legal master’s from Duke.

Clyburn said he felt Childs’ education outside the Ivy League, coupled with her upbringing in a single-parent household, would give the court an important perspective it is now missing.

“We run the risk of creating an elite society,” Clyburn told reporters. “We’ve got to recognize that people come from all walks of life, and we ought not dismiss anyone because of that.”

All of her experiences, Clyburn said, give Childs the “ability to empathize.”

Currently, one third of Biden’s Cabinet is comprised of Harvard graduates. On Barack Obama’s last day as president, half his Cabinet members held degrees from Harvard, including Obama himself.

Kagan graduated from Harvard law, and she later served as dean of Harvard Law School.

Sotomayor graduated not form Harvard, but from Yale Law School, and she later amassed more than a decade’s experience on the federal appeals court for her home district in New York.

Childs was asked in a 2020 Q&A with her alma mater what advice she would give a young lawyer. She opined on the meaning of success, stressing the importance of becoming “a person of courage and conviction.”

“We all have a crucial role, individually and collectively, to be architects of society,” she said. “Being successful is not just for the purpose of a place of comfort and satisfaction, but a place of responsibility and challenge.”