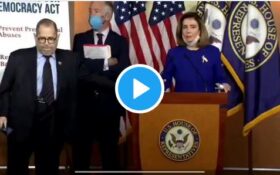 House Judiciary Chairman Jerry Nadler, D-N.Y., had a strange health episode that was captured on live television in the middle of a press briefing — and the footage quickly went viral.

Nadler is one of the most powerful leaders of the Democratic Party. As House Judiciary Chairman, Nadler was a co-leader of the Democrat-led impeachment of President Donald Trump.

A recent viral video has critics wondering if he’s okay.

Nadler was at a press conference promoting the “Protect our Democracy Act” when a camera caught his very strange behavior.

As House Speaker Nancy Pelosi, D-Calif., was speaking, Nadler suddenly grabs the podium and begins to shuffle bizarrely off the stage. The cameraman follows him for a short while before panning back to Pelosi.

Some social media users wondered if Nadler had an “accident” in his pants, and compared the moment to a January incident where Rep. Eric Swalwell, D-Calif., passed gas during an interview on MSNBC’s “Hardball.”

This isn’t the first health controversy surrounding Nadler. He has repeatedly fallen asleep during hearings over the last year, has been involved in a car accident, and has fainted on stage at events.

One social media user said Nadler’s health issues are another example of the need for term limits for American politicians.

Does this viral video show it’s time for term limits?

It's time for @JerryNadler to retire pic.twitter.com/Ya4ArTUfyA

For reference, here is a video showing how Nadler normally walks —

how is Jerry Nadler even real? pic.twitter.com/0H6Jml3cJ3