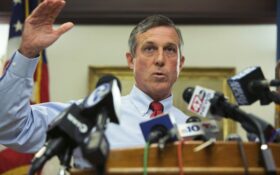 When the FBI announced federal charges on six men involved in a plot to kidnap the governor of Michigan, critics noted that the legacy media outlets and social activists pushed all kinds of narratives.

They said the extremist plot could be traced back to President Donald Trump.

Even Michigan Gov. Gretchen Whitmer herself claimed the president was “complicit” in the terror conspiracy — even though one of the militiamen was outspokenly anti-Trump anarchist who called the president a “tyrant”.

The group overall was an anti-government organization, not a pro-Trump one.

So is it any wonder the legacy outlets aren’t talking about the fact that the Democratic governor of Delaware previously pardoned one of the men accused in the conspiracy, according to Delaware-based News Journal?

Gov. John Carney reportedly let one of the alleged terror suspects off the hook in April 2019.

According to The Washington Free Beacon, Barry Gordon Croft Jr. had charges for possession of a firearm while committing a “felony, assault, and burglary,” stemming back to the 1990s — but was parndoned by Carney.

Remember, these 13 people charged — six federally along with seven others — were the would-be terrorists that the FBI did catch.

There’s no telling who else has been let out of jail, but has the same radical motives… and is still wandering the streets.

The disclosure came during a federal court hearing in Grand Rapids, where agent Richard Trask revealed new details about investigators’ use of confidential informants, undercover agents and encrypted communication to thwart the purported scheme to abduct Democratic Gov. Gretchen Whitmer.

“They discussed possible targets, taking a sitting governor, specifically issues with the governor of Michigan and Virginia based on the lockdown orders” they had issued to deal with the pandemic, Trask said, referring to a June 6 meeting in Dublin, Ohio, attended by roughly 15 members of anti-government groups from “four or five states.” A criminal complaint said at least two of the defendants were among them.

It wasn’t immediately clear if talk of targeting Virginia’s Democratic governor, Ralph Northam, continued beyond the meeting. Nothing from the complaint or Trask’s testimony indicated that anyone had been charged with plotting against Northam.

Following the arrests last week, the White House said the president has condemned hate, and Trump tweeted: “I do not tolerate ANY extreme violence.”

Northam said during a news conference he and his family felt safe with security Virginia’s state police provide, and that he had been threatened before. His protection was tightened this year after he signed gun control legislation.

“I’m continuing my work for the commonwealth as I would any other day,” he said.