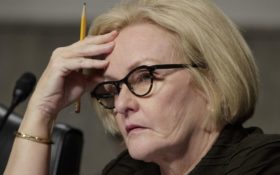 One of the most vulnerable Democrats in the Senate has just found herself at the heart of an ugly new scandal.

Sen. Claire McCaskill (D-Mo.), already slipping the polls in her deep red state, is fending off charges that her husband has earned big money thanks to her high-profile government gig.

The Kansas City Star blew the lid off this story with a report detailing how businesses linked to Joseph Shepard – the senator’s husband – have seen a sudden change in fortune since she took office in 2007.

They’ve taken $131 million in federal subsidies over the past decade!

Those businesses received $62 million during her first term and $69 million so far in her second… a remarkable turn of fortune for his government-subsidized housing business.

The newspaper said there’s no evidence McCaskill helped to enrich her husband. But this is an industry that by nature benefits from good connections in government – and critics are wondering if there’s any better connection to have than a United States senator.

“Perhaps the senator or her husband ought to explain his method for identifying projects likely to receive taxpayer subsidies,” the Wall Street Journal’s editorial page wondered. “Even people who aren’t married to politicians might like to learn how to pursue such opportunities.”

The Star noted that much of the $131 million is going to operate those housing projects rather than his personal accounts.

However, those have seen a major uptick in fortune as well.

Instead of coming clean and explaining what was going on, her office is acting offended.

“Claire’s work in the Senate has absolutely nothing to do with her husband’s business investments,” Meira Bernstein, McCaskill’s campaign spokeswoman, sniffed at Fox News. “It is outrageous that Hawley’s backers are trying to distort and demonize Joseph Shepard’s business success while they celebrate Donald Trump’s business record and wealth. It is the definition of hypocrisy.”

Her husband is taking a similar approach. He’s refused to answer questions himself, instead leaving it to his company.

“Joseph Shepard’s work with federal affordable housing projects has decreased almost 40 percent since he met Claire in 2001, years before she was elected to the United States Senate,” Tony Wyche, a spokesman for Shepard’s company Sugar Creek, told the Star in a statement. “He is now a limited partner in the vast majority of these investments, meaning that he has absolutely no say in how the projects are run and any money that he receives is limited by law.”

McCaskill is locked in a tight race for reelection and is trailing Missouri Attorney General Josh Hawley, her Republican opponent, by 2 points in the most recent poll.

This bombshell report can upend the election… and it could help ensure Republicans maintain control of the Senate.

The GOP has sure noticed —

Claire voted against #TaxReform while her husband was making millions from offshore hedge funds and hundreds of millions from federal government subsidies.

DC is working for Claire and her family… how about yours? #MOSen https://t.co/vySQWjwbVl

In addition, conservative groups are seizing on the scandal with the Club for Growth Action promising to spend big to help Hawley.

“While Sen. McCaskill has voted over and over against policies that will help workers and families keep more of their hard-earned money, she and her husband have made millions off of insider deals to secure government contracts and subsidies,” said Jeff Roe, the group’s strategist for Missouri, told the McClatchy news service.

Now, it’ll be up to the voters of Missouri, a state Trump won by 18 points.