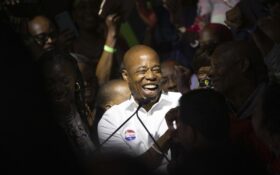 One of the most popular Democrats in the country has just gotten caught red-handed giving a powerful government job to his family just days after being inaugurated — and then, he defended the action.

The cushy job comes with a six-figure salary and benefits so generous only the government could afford to give them out.

That’s a pretty big promotion from his current job as assistant director for parking at Virginia Commonwealth University, which he’s held for the last 11 years.

And when critics accused him of abusing his office to enrich his family, Adams didn’t take a backward step. He said his brother had to have the job to help fight “white supremacy.”

Mayor Adams began his defense by saying his brother, a retired NYPD sergeant, is “qualified” for the position.

“Number one, he will be in charge of my security, which is extremely important to me at a time when we see an increase in white supremacy and hate crimes,” Adams told reporters about the controversial pick.

“We have a serious problem with white supremacy,” said Adams of New York City, one of the most diverse cities in the world.

Maybe more to the point, Adams said, “I trust my brother.”

“My brother understands me,” said Adams during an interview on Sunday. “And if I have to put my life in someone’s hands, I want to put it in the hands of a person that I trust deeply, because that is a very personal process of your security.”

They even say Adams’ appointment broke the law.

“As the City Charter makes clear, New Yorkers expect that public servants are hired based on their unique qualifications and not because they are the Mayor’s brother,” said Susan Lerner of the good-government watchdog group Common Cause/NY.

Lerner isn’t the only one concerned about the appearance of impropriety in Adams appointing his brother to a high-ranking, good-paying government gig. The city would like a word with its new mayor.

New York City’s official overseers of appointments, the NYC Conflict of Interest Board, will have to review the selection and decide whether or not Adam’s family favoritism is above board. Adams told the press this weekend that “that process is underway.”

His brother’s appointment was actually one of two appointments that Adams made during his first week on the job that smacked of nepotism.

Adams also created a new position that had not been filled in more than 20 years, Deputy Mayor for Public Safety, and appointed Philip Banks.

Phil’s qualifications include being an unindicted co-conspirator for police fraud. He resigned after his last promotion in 2014, and federal investigators wanted to know about $300,000 he and his wife squirreled away in their bank accounts.

“I believe that Phil acknowledges there were some real mistakes and errors that were made,” Adams said.

But Phil Banks has something else going for him: He is also the brother of the recently appointed chancellor of New York City public schools, David Banks.

Republicans may be the party of family values, but Democrats are the party that increases their family’s net value.

Other observers agree appointing so many relatives could put a worm in the Big Apple.

“There’s specific conflict of interest laws against a public official or even a public servant, using their influence to get loved ones and relations jobs. It really seems like Eric Adams is coming in violation of that here,” said Jeff Coltin, a reporter who works at City & State.

If Eric Adams keeps this up, New York City will have to change its name to Philadelphia—”the city of brotherly love.”