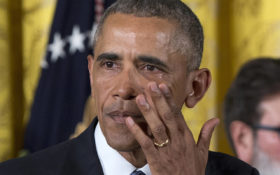 Former President Barack Obama and his wife Michelle were spotted by concert goers on Saturday night at rapper Jay Z and singer Beyonce’s tour in Maryland.

Although the couple was in a box at the concert venue, fans were able to capture cellphone footage of the Obamas dancing and enjoying the concert.

After the video went viral on Twitter, Top CNN star Jake Tapper criticized the couple after he felt that they should be out campaigning for the Democratic party during the midterm elections, rather than out partying at a concert.

This was the second time that former First Lady Michelle Obama attended the “On the Run II” tour, and this time she brought her husband.

Well well! This DC On the Run concert with Jay-Z and Beyoncé is very Presidential. Former President Obama and the Former First Lady Mrs. Obama are here for this amazing show. Mrs Obama was just in Paris for the show. Amazing show

“This DC On the Run concert with Jay-Z and Beyoncé is very Presidential. Former President Obama and the Former First Lady Mrs. Obama are here for this amazing show,” she wrote on Twitter.

But, her fellow CNN coworker Tapper did not approve of the Obamas out “living their best life,” he instead blamed them for the decline of the Democratic party —

Jake, I respect your work, but what you’re saying is that when you retire from CNN, you’ll still have an obligation to spend your time trying to make sure their ratings stay high.

He served his party and country to the best of his abilities, and now he’s off the clock.

Suddenly I am inclined to reexamine your entire journalistic career for bias against O.

But, Tapper responded to the leftists complaints by explaining, “Kind of a combo of 2 and 3. Glad he’s enjoying his life; he’s entitled. Also, FYI, as we begin focus on Nov 2018 and 2020, he presided over a historically precipitous decline of his party. Just a factual matter. Some Dems seem angrier at my tweet than at that fact.”

It is about time that someone admitted that Obama ruined the Democratic party — and politics in general — but no one expected fake news CNN to step up and be the one.