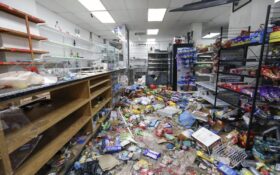 A California Democratic Party leader suddenly broke with his party on Tuesday and declared “enough is enough” when it comes to lawlessness in the Golden State.

“Enough is enough, we need to fight back against the criminals who are stealing from our communities,” Democratic Assemblyman Rudy Salas declared.

He has introduced a bill to the California Legislature that would reverse Proposition 47, a 2014 bill that reduced penalties on stealing items valued below $950 in the state. The bill lowered the penalty of these thefts from felonies to misdemeanors and limited police enforcement.

Since then, smash-and-grab looting has paralyzed retailers throughout California — especially in the Bay Area.

“We have seen the unintended consequences of Prop 47’s weakening of our theft laws and I believe California voters are ready to make their voices heard on this issue again,” Salas said.

For months, both prosecutors and retailers have begged California lawmakers to give them more tools to combat brazen retail theft.

“We cannot function as a society where we have told people over and over again that there is no consequence for stealing other people’s property,” said Vern Pierson, immediate past president of the California District Attorneys Association and El Dorado County’s district attorney, said in December.

While shoplifting has been a growing problem since Prop. 47 first passed into law, recent large-scale thefts in California and elsewhere in which mobs brazenly rush into stores and take goods in plain sight are ”raising it to a whole new level,” California Retailers Association President and CEO Rachel Michelin said.

“We feel a little bit like we’re under assault,” she said.

California Gov. Gavin Newsom and Attorney General Rob Bonta have blamed local police and prosecutors, and said they still have the legal tools to go after criminals but choose not to do so.

“It’s patently false to assert that we have enough laws on the books that are fixing this problem, because it’s obviously not going away and won’t be going away,” countered John Kabateck, director of the California chapter of the National Federation of Independent Businesses.

Salas’ bill would have to first pass the California Legislature and then be signed into law by Newsom to reverse Prop. 47.