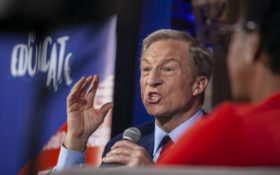 Billionaire Tom Steyer is a more recent entrant into the 2020 Democratic presidential race.

But his early actions are proving that he’s a seasoned liberal as they come. He and his campaign are already being accused of corruption.

First it was a campaign aide who allegedly hacked a rival Democrat’s volunteer data. Now, a different aide has been fired after reportedly attempting to bribe local Iowa officials with a “quid pro quo” arrangement, according to The Associated Press.

Pat Murphy, the aide in question, has resigned from Steyer’s campaign.

Campaign manager Heather Hargreaves wrote, “After the conclusion of an investigation alleging improper communications with elected officials in Iowa, Pat Murphy has offered his resignation from the campaign effective immediately.”

“Our campaign policy is clear that we will not engage in this kind of activity, or any kind of communication that could be perceived as improper. Violation of this policy is not tolerated.”

Murphy has since apologized.

His actions weren’t illegal, according to The Associated Press, because Murphy offers weren’t accepted. It would have been illegal if they’d been accepted, and the payouts were not disclosed.

Many local politicians just saw the political stunt as unprofessional.

As one former state senator Tom Courtney put it, the entire situation “put a bad taste in my mouth.” Courtney even recalled hearing the aide saying, “Tom, I know you’re running for Senate. I’m working for Tom Steyer.”

“Now you know how this works. You help them, and they’ll help you.”

The Associated Press reports that Courtney wasn’t the only one who was promised benefits for backing Steyer. Iowa state Rep. Karin Derry said that Steyer’s campaign was clear in its shady motives. She said, “It was presented more as, he has provided financial support to other down-ballot candidates who’ve endorsed him, and could do the same for you.”

And now, with three months remaining until the Iowa caucuses, Steyer is down two campaign staffers.

It seems that the liberal billionaire who once called President Donald Trump corrupt, has more problems in his own house than the White House.