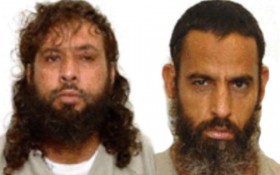 They’re experts in explosives. They’ve vowed again and again to kill Americans. And the Obama administration is sending them to a region where it’s almost certain they’ll be freed.

Senegal, a predominantly Muslim country on West Africa’s coastline, has agreed to take in two Islamic terrorists who spent nearly 14 years in custody at the U.S. base in Cuba without charge, becoming the second country in West Africa to accept former detainees, officials said Monday.

Salem Abdu Salam Ghereby, 55, and Omar Khalif Mohammed Abu Baker Mahjour, who records show is about 44, were both members of the Libya Islamic Fighting Group, an organization that sought the ouster of Libyan leader Moammar Gadhafi and had been designated a terrorist organization by the U.S. since 2004. And they both have strong affiliations with Al Qaeda.

Their departure comes amid an effort by President Barack Obama to release Guantanamo prisoners who are no longer deemed a threat and to eventually close the detention center, a prospect that faces strong opposition in U.S. Congress. With the release of the two Libyans, there are 89 men left, including 35 cleared for release who are expected to be gone within months.

According to the New York Times, the Department of Defense reported that Omar repeatedly “threatened to kill U.S. personnel” while at Guantanamo and “shares his extensive explosives knowledge with other detainees.”

“Detainee is a long-time associate of UBL and has affiliations to other senior Al Qaeda leaders and operatives including Ayman al-Zawahiri,” the report said. UBL is a common government code name for Osama bin Laden.

Ghereby had been radicalized in the mid-90s and according to the DOD report was captured fleeing Pakistan “with a senior Al Qaeda leader.”

“Detainee is assessed to be a HIGH risk, as he is likely to pose a threat to the U.S., its interests and allies.”

Their arrival comes amid growing concern about Islamic extremism in Senegal.

Officials in the country have grown increasingly concerned about the threat of jihadis in recent months. Al Qaeda’s North Africa branch has carried out a series of deadly attacks on places popular with foreigners, including hotels, a restaurant and a beach in the region.