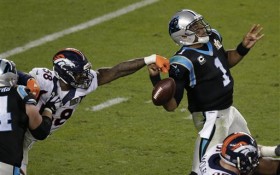 For so many years, legendary Denver Broncos quarterback Peyton Manning’s career was defined by his gaudy regular season numbers that weren’t enough come playoff time. A lack of help from teammates or the inability to thrive against stellar defenses from teams such as New England and Seattle left Manning with just one Super Bowl title in his first 13 playoff trips.

So perhaps it was fitting that after carrying teammates for most of his career, Manning got lots of help from his defense yesterday as the Broncos defeated the Carolina Panthers 24-10 in Super Bowl 50.

Here are the five top memories from Super Bowl 50 everyone is talking about:

After knocking off former Super Bowl champions Ben Roethlisberger and Tom Brady and then holding Panther’s Cam Newton and the NFL’s highest-scoring offense to its lowest point total of the season, the Broncos stated their case to stand next to Pittsburgh’s Steel Curtain defenses of the 1970s, the dominant 1985 Chicago Bears, the 2000 Baltimore Ravens, the 2002 Tampa Bay Buccaneers and the 2013 Seattle Seahawks on the list of top defenses with their dominate performance Sunday.

Super Bowl MVP Von Miller set the tone early when he blew past right tackle Mike Remmers and ripped the ball out of Newton’s grasp. Malik Jackson recovered the ball in the end zone for a touchdown to put Denver up 10-0.

Then in the fourth quarter with the Broncos protecting a 16-10 lead, Miller struck again. Once again, he got around Remmers and knocked the ball out of Newton’s hands. T.J. Ward recovered at the 4 and C.J. Anderson sealed it with a TD run.

“In my opinion, we’re the greatest defense to ever play the game,” linebacker Brandon Marshall said. “Ever. It’s a bold statement but top to bottom, we have the greatest talent — from rushers to safeties to linebackers. Better than anybody’s ever done it.”

Before the game, Lady Gaga performed a classically lovely version of the national anthem, accompanied by a piano and looking sharp in a red pantsuit with matching eye shadow.

Perhaps relieved with the pressure done, she vamped a little on “the brave” at the end, causing a flutter among betting houses that annually set odds on how long it would take to sing “The Star Spangled Banner.”

Compared to a lackluster halftime show and commercials that failed to wow, Gaga’s performance stole the show and was the most memorable.

Peyton rides out into the sunset

He wasn’t the star of Super Bowl 50 — game MVP Miller seemingly was everywhere on every Carolina play — but Manning really hasn’t been the headliner in this injury-shortened season.

“This game was much like this season has been, testing our toughness, our resiliency, our unselfishness,” he said. “It’s only fitting that it turned out that way.”

Emulating his Broncos boss, John Elway, the 39-year-old Manning can ride off with the Lombardi Trophy after leading Denver to its third NFL title, first since 1999 — when Elway was the quarterback.

“I’ll take some time to reflect,” Manning said when asked if this is the end. “I got a couple priorities first. I’m going to go kiss my wife and my kids. … I’m going to drink a lot of Budweiser tonight.”

It wasn’t just big plays from the defense that helped Manning. A historic special teams play helped Denver break out to the lead in the first half.

Jordan Norwood set up an important Denver score with the longest punt return in Super Bowl history (61 yards) and the Broncos took a 13-7 halftime lead over the Carolina Panthers on Sunday.

Manning had led a field-goal drive to open the game, but Denver did not get a first down on its next four drives. Manning was just 9 for 16 for 76 yards and an interception in the half.

So special teams picked up the slack. The first half ended 13-7 after Denver kicker Brandon McManus made a 33-yarder that followed the longest punt return in Super Bowl history. Panther Brad Nortman’s punt from his 12 was barely deflected, and the ball fluttered to Jordan Norwood. One Panther bumped Norwood, who didn’t call for a fair catch. Escorted by a bevy of blockers, he appeared headed for a touchdown until DE Mario Addison chased him down at the Carolina 14, a 61-yard jaunt.
Cam Newton vows, “We’ll be back.”

Carolina quarterback Cam Newton didn’t say much after the Panthers lost Super Bowl 50 on Sunday night, failing to answer questions about his strange behavior following one fumble where it appeared he jumped away from the ball instead of diving for it. But in his post-game press conference, the league’s MVP did promise this: “We’ll be back.”

Only time will tell. The Panthers could fade into oblivion, like the San Francisco 49ers did after losing the Super Bowl three years ago. Or they could bounce back, just like these Denver Broncos did after a devastating loss in the big game two years ago.

Either way, Carolina’s mettle will be tested when they report to training camp in Spartanburg, South Carolina this summer.