The top 5 Fourth of July celebrations - The Horn News 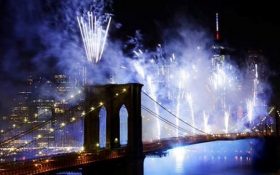 There are thousands of fireworks displays, barbecues, parties and concerts to celebrate the Fourth of July, it’s impossible to decide how to celebrate! We here at The Horn News have rounded up our nation’s top five Independence Day events from sea to shining sea.

The largest fireworks display in the Southeast takes place in Atlanta’s Centennial Olympic Park and is broadcast by WSB-TV, which won an Emmy for the broadcast in 2012. The event is free to attend, and includes entertainment by Montell Jordan and J-Fly and friends, followed by fireworks at dark. Find out more here.

This incredible celebration attracts more than 75,000 people to downtown Minneapolis each year. It is an all-day event, beginning with a half-marathon, relay and 5k at 6:30 a.m., followed by live music, movies and of course a fireworks display! Learn more here.

Celebrating its 43rd anniversary this year, the Boston Pops Fireworks Spectacular began as the first free outdoor symphony in the world. In its second year, the July 4th tradition was born, when howitzer cannons, church bells and fireworks were added to the show. This year the show will stream live on CBS from 9 – 11 p.m. ET, hosted by Emmy Award-winning journalist Nancy O’Dell with performances by Demi Lovato, Nick Jonas, and Little Big Town. The spectacular fireworks will follow, beginning at 10:30 p.m., and light up the sky over the Charles River to round out an incredible celebration. More event information here.

Don’t worry if you can’t make it to our nation’s capital this Fourth of July. A Capitol Fourth will be broadcast live on PBS from the West Lawn of the U.S. Capitol from 8 to 9:30 p.m. ET. There will be amazing fireworks and a star-studded lineup hosted by two-time Emmy Award-winning host Tom Bergeron, featuring performances by Smokey Robinson, Kenny Loggins, The U.S. Army Band’s “Pershing’s Own” and many others. Find out where you can watch it here.

The 40th annual Macy’s 4th of July Fireworks is the biggest fireworks display in the nation. It will take place at 9 pm in New York City and stream live on NBC beginning at 8 p.m. ET. Performers include Kenny Chesney, Megan Trainor, 5 Seconds of Summer and Pitbull. A patriotic score performed by The United States Air Force Band will accompany the spectacular 25-minute firework display, capping it off with a soaring rendition of America the Beautiful with vocals by the legendary Jennifer Holliday. It’s safe to say this show can’t be missed! Check it out here.

Is there a special celebration or tradition you love that we missed? Share it with us below!

Whatever you do, The Horn News is wishing you a happy 4th of July — and God bless America!