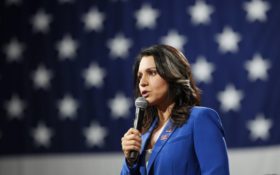 Rep. Tulsi Gabbard says she won’t attend this month’s Democratic presidential primary debate in Los Angeles, even if she qualifies for the event.

In a Tweet on Monday the Hawaii Democrat said she would “instead choose to spend that precious time directly meeting with and hearing from the people of New Hampshire and South Carolina.”

Gabbard had not yet qualified for the Dec. 19 debate. Candidates need to hit 4% in four eligible polls or 6% in two eligible state polls and have 200,000 unique fundraising contributors.

Gabbard, a long-shot candidate, also threatened to skip the October debate in Ohio but ultimately participated.