Tonight, Trump to give HISTORIC speech (what you need to know) - The Horn News 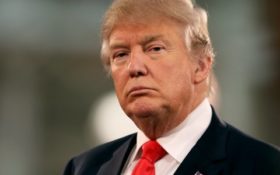 President Donald Trump will use a nationally televised address to outline a historic strategy he believes will best position the U.S. to win in Afghanistan after 16 years of combat and lives lost.

The speech Monday night will also give Trump a chance to remind American voters why they chose him to be president after one of the most difficult weeks of his short presidency.

Trump tweeted Saturday that he had reached a decision on the way forward in Afghanistan, a day after he reviewed war options with his national security team at a meeting at Camp David, Maryland.

Important day spent at Camp David with our very talented Generals and military leaders. Many decisions made, including on Afghanistan.

But signs pointed in the direction of Trump continuing the U.S. commitment there.

The top U.S. commander in Afghanistan on Sunday hailed the launch of the Afghan Army’s new special operations corps and declared that “we are with you and we will stay with you.”

Trump scheduled a 9 p.m. EDT Monday address to the nation and U.S. troops stationed at the Army’s Joint Base Myer-Henderson Hall. Next door to the base is Arlington National Cemetery, the final resting place for many of the U.S. troops who died fighting in Iraq and Afghanistan.

It will be Trump’s first formal address to the nation outside of his late February speech to a joint session of Congress. And it follows one of the most trying weeks for the president, after the media criticized Trump’s condemnation of neo-Nazis and white supremacists as not forceful enough.

Trump blamed “very fine people, on both sides” for the confrontation in which a woman was killed and more than a dozen people were injured. For days afterwards, Trump strongly and repeatedly condemned racism and neo-Nazis.

In Afghanistan, Gen. John Nicholson’s comments suggested the Pentagon may have won its argument that U.S. military must remain engaged in order to ensure that terrorists aren’t again able to threaten the U.S. from havens inside of Afghanistan.

Nicholson, who spoke before the announcement about Trump’s speech, said the commandos and a plan to double the size of the Afghan special operations forces are critical to winning the war.

“I assure you we are with you in this fight. We are with you and we will stay with you,” Nicholson said during a ceremony at Camp Morehead, a training base for Afghan commandoes southeast of Kabul.

The Pentagon was awaiting a final announcement by Trump on a proposal to send in nearly 4,000 more U.S. troops. The added forces would increase training and advising of the Afghan forces and bolster counterterrorism operations against the Taliban and an Islamic State group affiliate trying to gain a foothold in the country.

The administration had been at odds for months over how to craft a new Afghan war strategy amid frustrations that the conflict had stalemated some 16 years after the 9/11 terrorist attacks.

The Afghan government controls just half of the country and is beset by endemic corruption and infighting.

Defense Secretary Jim Mattis, who visited Afghanistan over the weekend, declared himself satisfied with how the administration had formulated its new strategy.

But he refused to discuss details before Trump’s announcement.