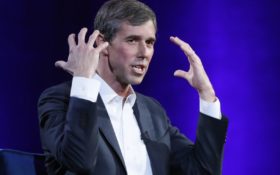 Democrat Beto O’Rourke, a candidate for Texas governor, has made national headlines on the campaign trail. He’s fired off profanity on speaking tours, and he’s disrupted the press conferences of his opponent, incumbent Gov. Greg Abbott.

However, O’Rourke has grown quieter since then. On Sunday, he revealed why: He was rushed to the hospital over the weekend.

O’Rourke, 49, tweeted Sunday that he was hospitalized for an infection two days before.

“After feeling ill on Friday, I went to Methodist Hospital in San Antonio where I was diagnosed with a bacterial infection,” O’Rourke wrote. “The extraordinary team there — from custodians to nurses and doctors — gave me excellent care and attention, including IV antibiotics and rest.”

According to the campaign, O’Rourke saw his symptoms improve, and he checked out of the hospital to recover at home.

However, he postponed some campaign events indefinitely.

“While my symptoms have improved, I will be resting at home in El Paso in accordance with the doctors’ recommendations,” O’Rourke wrote. “I am sorry to have had to postpone events because of this, but promise to be back on the road with you as soon as I am able.”

O’Rourke, who has a wife and three children, earned well wishes from members of both parties.

Conservative commentator Carmine Sabia tweeted, “Prayers for Beto O’Rourke. I pray for his recovery and health.”

While recovering, O’Rourke has been hosting outreach events virtually. He also took the opportunity to tout his health care plan.

“We’re going to expand Medicaid, bring $10 billion/year back to Texas, and help more people get the care they need,” O’Rourke tweeted.

O’Rourke served in the U.S. House from 2013 to 2019. He achieved national attention in 2018 for running a suprisingly close race against incumbent Sen. Ted Cruz, R-Texas.

After leaving Congress, O’Rourke ran for president, and he made some inflammatory remarks about firearm confiscation.

“Hell yeah, we’re going to take your AR-15,” he said on a debate stage in 2019, when asked about his plan for a mandatory buyback program.

He suspended his presidential campaign in November 2019, more than a year before the actual election.

In a Dallas Morning News poll earlier this month, O’Rourke was trailing Abbott by about seven points… not quite a landslide, but not close either.