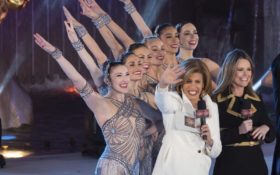 Kotb, 53, will continue to co-host the show’s fourth hour with Kathie Lee Gifford.

It will be the first all-female team headlining “Today” in the show’s 65-year history. Diane Sawyer and Robin Roberts blazed that path for ABC’s “Good Morning America” in the 2000s, but morning shows have traditionally paired a man and a woman as host. With an audience dominated by women in an era where news of badly behaving men is frequent, the Guthrie-Kotb pairing may be particularly timely.

“Today” won’t be an all-female zone in its first half, however, with longtime weather forecaster Al Roker and correspondent Carson Daly as regulars. Megyn Kelly hosts the show’s third hour.

“This has to be the most popular decision NBC News has ever made and I am so thrilled,” Guthrie said on Tuesday, announcing the appointment on the air.

“I am pinching myself,” said a beaming Kotb, sitting beside her. “I think we should send some medics to Alexandria, Virginia, where my mom has likely fainted.”

Lauer’s eventual replacement had long been the subject of internal angst but with a sudden decision forced upon the network, Kotb’s performance made it easier. She’s subbed for Lauer since the day he was fired and “Today” has won four straight weeks in the ratings, after having spent much of the past few years in second behind ABC.

“Hoda has seamlessly stepped into the co-anchor role alongside Savannah, and the two have quickly hit the ground running,” NBC News Chairman Andy Lack said in a memo to staff on Tuesday. “They have an undeniable connection with each other and most importantly, with viewers, a hallmark of ‘Today.’”

Lack said Kotb “has the rare ability to share authentic and heartfelt moments in even the most difficult news circumstances. It’s a tribute to her wide range and her innate curiosity.”

Lauer had been a fixture at “Today” since the mid-1990s before his abrupt firing for what NBC called “inappropriate sexual behavior” with a colleague. Other complaints and reports of crude behavior followed.

He was the second television morning host fired in a week, after CBS News axed Charlie Rose just before Thanksgiving on sexual misconduct charges. Rose was one of three “CBS This Morning” hosts with Gayle King and Norah O’Donnell, and CBS has yet to name his replacement. Substitutes have included Vladimir Duthiers, Bianna Golodryga, Dana Jacobsen, John Dickerson and Anthony Mason.

Kotb joined NBC News in 1998 as a “Dateline NBC” correspondent, after working in local news in New Orleans. Her public profile increased with her wine-soaked pairing with Gifford on the show’s informal fourth hour.

She was born in Norman, Oklahoma, to parents of Egyptian descent, and raised in Morgantown, West Virginia.

Ben Bogardus, a journalism professor at Connecticut’s Quinnipiac University, said Kotb’s selection was a good one “because it reinforces the sense of a family coming together after a shared trauma.” The timing is important for NBC, because “Today” will get a burst of attention next month with the Winter Olympics.