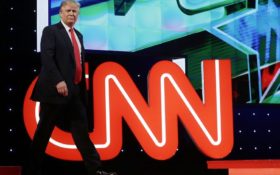 President Donald Trump has had such undeniable success lately that, every once in a while, even Fake News reporters have to tell the truth.

On Wednesday, CNN swallowed its pride and owned up to the fact – for just a second.

In a headline that must have made Jim Acosta scream, CNN posted an article describing “How Donald Trump just keeps winning.”

Trump endorsed 5 winners in Tuesday’s contested elections – and rubbed the media’s nose in it the next morning. On Wednesday, Trump tweeted that his candidates went “5 for 5!”

Trump-endorsed candidates made a clean electoral sweep all across the country.

The president backed Troy Balderson for Congress in a special race for Ohio’s 12th district. After beating the Democrat, Balderson personally thanked Trump and said, “Over the next three months, I’m going to do everything I can to keep America great again.”

In a bigger upset, Kris Kobach currently holds a 200-vote lead in the Republican primary for governor of Kansas. What’s shocking is the person Kobach is beating: the current governor, Republican Jeff Colyer!

Two Trump-backed candidates won in Michigan: Bill Schuette beat the GOP field to run for governor in the fall, and John James earned the Republican nomination for U.S. Senate.

After his showing, Trump tweeted:

As long as I campaign and/or support Senate and House candidates (within reason), they will win! I LOVE the people, & they certainly seem to like the job I’m doing. If I find the time, in between China, Iran, the Economy and much more, which I must, we will have a giant Red Wave!

Cillizza couldn’t believe his eyes, but he had to admit the president made all the difference.

“Without the Trump endorsement, there is no way James is the Senate nominee in Michigan,” he wrote. “And Kobach almost certainly comes up short without Trump.”

“Poll after poll has shown that Trump is among the most popular Republican presidents ever among Republicans,” Cillizza wrote.

And presidents whose approval ratings are historically high teach the party certain lessons.

“Trump’s takeover of the party is total. The Republican base is almost entirely aligned with him; those who cross Trump — especially people in the GOP — are made to feel the pain,” Cillizza said.

The president has a much tighter grasp on his party’s hearts, minds – and votes – than socialist Alexandria Ocasio-Cortez.

Even though DNC Chair Tom Perez called the 28-year-old socialist “the future of the Democratic Party,” four of the six candidates she endorsed lost on Tuesday.

If she’s the future of the Democratic Party, then the future means losing.

That drove the media into a meltdown, trying to console itself over its losses…and Trump’s victories.

The New York Times attacked Trump with a phony “fact check,” saying that four of his endorsed candidates had lost races – before June, when his approval ratings really began to climb.

Of course, the Times knows a thing or two about losing. Subscribers fell by one-third, and total ad revenue collapsed by 10%, since last year.

“This is the Trump paradox for Republicans. Break with him and risk being on the wrong side of a primary loss. Stick with him and run the risk of being dragged down by his unpopularity with everyone outside of the Republican base,” he claimed.

He said that embracing Trump and trying to win a Congressional seat at the same time is a “near-impossibility.”

But then, Cillizza said the same thing about Donald Trump in 2016.

Cillizza told his fellow “journalists” not to report fairly on Trump.

Asking serious policy “questions gives Trump a benefit of the doubt that he simply doesn’t deserve: That a path exists for him to be president.”

“It doesn’t. Not even close,” Cillizza predicted in a Washington Post op-ed.

In Donald Trump, the GOP found something it hasn’t had in a long time: a winner.