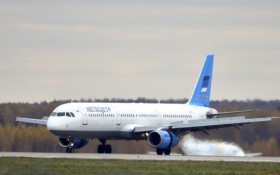 Authorities may have found proof that a bomb set with a timer was responsible for the downing of a Russian jetliner that killed 224 people recently.

Officials said Wednesday they now have intelligence information suggesting the jetliner that crashed in the Egyptian desert may have been brought down by an explosive device aboard the plane, and that a timed detonation was likely used.

Intercepted communications have led to the tentative conclusion that the Islamic State group’s Sinai affiliate may have planted the device, said a U.S. official briefed on the matter. He spoke on condition of anonymity because he wasn’t authorized to discuss intelligence matters publicly.

British Foreign Secretary Philip Hammond said there was a “significant possibility” the crash was caused by a bomb, and Britain was suspending flights to and from the Sinai resort of Sharm el-Sheikh indefinitely.

After a meeting of the British government’s crisis committee, COBRA, Hammond said Britain was advising its citizens not to go on vacation to Sharm el-Sheikh, which is visited by hundreds of thousands of Britons a year.

Meanwhile, Russian and Egyptian investigators said Wednesday that the cockpit voice recorder of the Metrojet Airbus 321-200 had suffered substantial damage in the weekend crash that killed 224 people. Information from the flight data recorder has been successfully copied and handed over to investigators, the Russians added.

Prime Minister David Cameron’s office said British aviation experts had been sent to Sharm el-Sheikh, where the flight originated, to assess security before British flights there would be allowed to resume.

Several British flights due to leave Sharm el-Sheikh for the U.K. Wednesday were grounded, leaving hundreds of tourists stranded.

Cameron’s 10 Downing St. office said late Wednesday that the team’s preliminary report “noted that the Egyptian authorities had stepped up their efforts but that more remains to be done.”

Downing Steet said it could not say “categorically” why the Russian jet had crashed.

“But as more information has come to light, we have become concerned that the plane may well have been brought down by an explosive device,” it said in a statement.

Cameron had discussed the issue of security at the Sharm el-Sheikh airport with Egyptian President Abdel-Fattah el-Sissi, who flew to Britain on Wednesday for an official visit, Downing Street said.

The British disclosures were an embarrassment to el-Sissi, who had insisted in an interview with the BBC on Tuesday that the security situation in the Sinai Peninsula is under “full control.” He has staked his legitimacy on restoring stability and reviving Egypt’s economy.

The suspension of flights is a further blow to Egypt’s troubled tourism industry, which has suffered in the unrest that followed the 2011 Arab Spring. The one bright spot for Egypt has been tourism at the Red Sea resorts.

Several airlines, including Lufthansa and Air France, stopped flying over Sinai after the crash, but British carriers had kept to their schedules. Almost 1 million Britons visit Egypt each year, many to Sharm el-Sheikh, which is also popular with Russians.

The Metrojet flight carrying mostly Russian vacationers from Sharm el-Sheikh to St. Petersburg broke up in the air at an altitude of 31,000 feet 23 minutes after takeoff and came down in the Sinai desert, Russian officials said.

The plane crash site, 70 kilometers (44 miles) south of the city of el-Arish, lies in the northern Sinai, where Egyptian security forces have for years battled local Islamic militants.

Two U.S. officials told the AP on Tuesday that U.S. satellite imagery detected heat around the jet just before it went down.