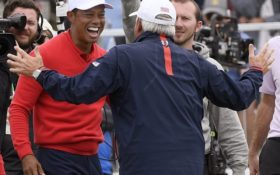 High emotions, fierce hugs from Tiger Woods, this time as a winner both ways in the Presidents Cup.

Woods capped off a big year that began with his 15th major at the Masters by playing and leading his U.S. team to another victory in the Presidents Cup on Sunday at Royal Melbourne.

The first playing captain in 25 years, he opened the 12 singles matches by beating Abraham Ancer to set the Presidents Cup record with his 27th match victory, and set the tone for the rest of his team.

The scoreboard was filled with American red scores all day as they rallied from a two-point deficit to win the Presidents Cup for the eighth straight time against an International team that faltered at the worst time.

Matt Kuchar delivered the clinching putt, a 5-footer for birdie that assured him a halve against Louis Oosthuizen and gave the Americans the 15 1/2 points they needed to win.

“For us to be in a hole, to come back and win this thing … to win it as a team, but to do it with Tiger Woods as our captain was just a huge thrill,” Kuchar said.

They result was 16-14, and at least this one was a contest. The U.S. victory two years ago at Liberty National was so resounding that it nearly ended on Saturday.

International captain Ernie Els was determined to turn it around. He created a new logo for the International team. He relied heavily on analytics. It still wasn’t enough.

“I followed a plan, and it didn’t quite work out, but we came damn close,” Els said. “If you compare our team on paper with other teams in other sport, you would have laughed us out of the building. But we gave it a hell of a go and we came mightily close to winning and upsetting one of the greatest golf teams of all time.”

Els thought back to Friday, when the Americans won two matches with birdies on the 18th hole and rallied to halve another to keep the International lead from growing.

On Sunday, all he saw was U.S. momentum that couldn’t be stopped.

“We gave you everything we had,” Els said to Woods at the closing ceremony. “You were the better team.”

Woods hugged everyone hard, players and vice captains alike, wearing a smile not seen since he walked off the 18th green at Augusta National after becoming a Masters champion again after injuries that nearly ended his career.

“We relied on one another as a team, and we did it — together,” Woods said, his voice choked slightly with emotion. “This cup wasn’t going to be given to us. We had to go earn it. And we did.”

Els fashioned the youngest International team from a record nine countries from everywhere outside Europe and took a 10-8 lead into the final day, the first time it had the edge in 16 years.

Patrick Reed, whose caddie was benched for shoving a fan who had cursed Reed from close range Saturday, built a 6-up lead through seven holes before eventually putting away C.T. Pan to win for the first time this week.

Webb Simpson, who played with Reed as they lost all three team matches, never trailed in beating Byeong Hun An. Everyone on the U.S. team contributed something.

With so much red on the board, Tony Finau might have been his team the biggest boost. He was 4 down through 10 holes against Hideki Matsuyama, won the next four holes and earned a half-point.

It came down to the final hole in South Korea four years ago. This time, the Americans were assured of a tie if the Internationals were to win the last three matches, creating at least a little drama.

“It’s hard to digest,” said Adam Scott, who has played in nine Presidents Cup without ever winning. “It’s incredibly disappointing but … I like where this team is going, and I’ll be working really hard now to be on the team in two more years.”

The only International victory was in 1998 at Royal Melbourne, and several players from that team came to Australia this week to conjure up good vibes. It only worked for so long.

The Americans won the singles session for the first time since 2009. Most years, their lead was so big it wasn’t critical. This time it was. They hadn’t trailed since 2003 in South Africa, the year of the tie.

So inspired was the American play that none of their six singles victories made it to the 18th hole.

The last two matches were halved, and the 8-4 advantage in singles matched the record for the largest Sunday margin since the Americans won 8-4 in the inaugural Presidents Cup in 1994.

The next Presidents Cup is in 2021 at Quail Hollow Club in North Carolina. In the meantime, the Americans will try to get on another team and win back the Ryder Cup, which gives them far more trouble.