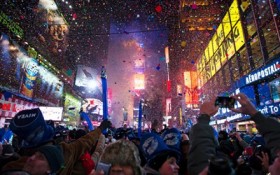 Terror threats against New York City, Los Angeles and Washington, DC will have all three cities on high alert as they ring in the new year this evening.

According to multiple media outlets, President Barack Obama was briefed on the threat of attacks in the cities before he left for his annual vacation.

The threats, which reportedly came from overseas sources, warned of attacks that could occur between Christmas and New Year’s.

Law enforcement officials aren’t taking the risk lightly. The FBI has announced it will be setting up multiple command centers in New York City, Los Angeles and Washington, DC, and New York City Police Commissioner Bill Bratton said 6,000 police officers will be deployed in and around Times Square.

More than 1 million people are expected to celebrate the new year in Times Square tonight.

Similar scenarios are playing out around the world. New Year’s celebrations in Belgium, Turkey and Russia have all been disrupted due to terror threats.