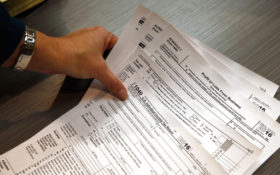 New Jersey and Connecticut are joining New York in planning to sue Washington over the Republican-led federal tax overhaul, the Democratic governors of the three states announced Friday.

Andrew Cuomo of New York, Dannel Malloy of Connecticut and Phil Murphy of New Jersey announced Friday that they’re talking to leaders of other states that stand to be hurt by the federal tax plan that’s expected to cost taxpayers in their states billions of dollars.

Murphy said he expects the suit to be filed within weeks. No decision has been made on where the action will be filed, Malloy said.

The new tax code passed by Republicans in Congress and signed into law last month by Republican President Donald Trump caps a deduction for state and local taxes at $10,000. That deduction had been popular in high-tax, Democratic states like New York, Connecticut and New Jersey, where many homeowners now face big increases in their federal tax bill.

“This is an assault on those states,” Malloy said.

Cuomo said the lawsuit could argue the tax law violates states’ rights and is unfair because it singles out Democratic states for political reasons.