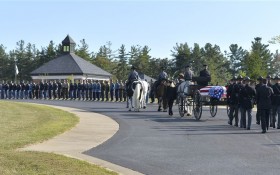 Hundreds of civilians and police attended the funeral service of a central Kentucky police officer who was gunned down last week while investigating a robbery.

Ellis died Friday, two days after being shot in the head while searching an apartment for a robbery suspect.

Thirty-four-year-old Raleigh Sizemore Jr. pleaded not guilty Monday to charges including murder of a police officer, attempted murder, unlawful imprisonment and possession of a handgun by a felon.

After the funeral, the procession traveled 100 miles to Adair County, where Ellis will be buried.