Thousands of bad Santas descend on NYC - The Horn News 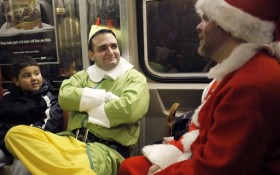 Could this be the year of SantaCon without SantaControversy?

After several years of defending the massive, costumed Christmastime bar hop against a bad-Santa rap, organizers are making new efforts to convey that the SantaCon coming to town Saturday is growing — not throwing — up.

For the first time, they publicly released the planned route days before their romp through Brooklyn and downtown Manhattan bars. Organizers, who once shied from officialdom, started planning with police over a month ago, got a permit to assemble in a park and even agreed to tweet police messages about pedestrian safety.

Performance art to some, pub crawl to others, SantaCon is trying to evolve as organizers face pressure to take more responsibility for revelry. It has ballooned in size to thousands of people and now is coming at a time of heightened concern about security and public gatherings.

“There’s a transition to a more positive SantaCon,” said Norman Siegel, a civil rights lawyer who has worked with the group since last year.

Still, mixed feelings are as evident as dueling pro- and anti-Santacon signs in windows of businesses in Manhattan’s East Village, and some officials are seeing red.

A dozen state and city politicians this week pressed SantaCon to “self-police” participants and asked the State Liquor Authority to station investigators along the route.

“Try spending an afternoon in some of our neighborhoods where the event is occurring, and you’ll find incidents of disruptive and boorish behavior,” says state Sen. Brad Hoylman, who represents Manhattan areas on the route. He said he was glad to see such changes as the route disclosure, but he’s still concerned the format encourages binge drinking.

The agency and SantaCon said they already planned to do what was asked.

SantaCon grew from a 1994 San Francisco “Santarchy” that satirized Christmas consumerism into bashes in over 300 cities. New York’s is generally acknowledged as the biggest.

Enthusiasts paint SantaCon as a creative take on holiday traditions of festive dress, good cheer and charity. Organizers say they raise tens of thousands of dollars for various causes.

But some New Yorkers came to see SantaCon as the fright before Christmas.

Police logged a total of two arrests and 85 summonses for disorderly conduct, open alcohol containers and other offenses during SantaCon in 2012 and 2013, when some Santas got into street fights seen in online videos. Commuter railroads began banning alcohol during the event, some Manhattan residents posted “SantaCon free zone” signs, and a city councilman effectively sank the group’s plans to venture into a Brooklyn neighborhood last year.

Organizers started trying to mend fences in 2013, telling police (but not, until now, the public) their route in advance and asking volunteers to defuse problems. A “Santa Code” urges revelers to spread “joy. Not terror. Not vomit. Not trash.”

Siegel said last year’s SantaCon counted no arrests or summonses; police said they had no information on any.

This year, SantaCon is roving a city that has been on alert since the attacks by extremists in Paris on cafes and other social venues . Organizers went forward in the spirit of not letting violence “change our traditions and our values,” Siegel said.

Joseph Mikos is ready — with an intricate, holiday-themed suit and two friends who will wear the same. He’s been going to SantaCon since 2009.

Everyone there is “willing to dress up, drink, meet people, and have fun,” the 29-year-old photographer said by email. “It is the kind of vibe I want to be around.”