This living woman's voting record goes back to FDR... - The Horn News 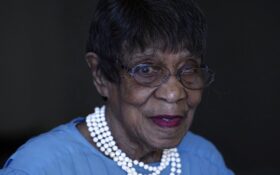 Talu Massey is among the millions of Americans who voted before Nov. 3, resulting in record-breaking early turnout.

But it’s far from the Detroit resident’s first election. Very far. She voted for FDR, after all.

The 103-year-old is proud of her lengthy voting record, saying it’s every citizen’s “civic duty” to take part in the process.

“I don’t remember whether I made each election, but I have been constantly voting,” said Massey, who was born in Birmingham, Alabama, in 1917.

She moved to Detroit as an infant and has been a resident of the Motor City for 102 of her years, during which she voted for a host of Democrats, including John F. Kennedy, Barack Obama and now Joe Biden.

Massey recently made an appearance in a music video entitled “I Have a Right to Vote” that seeks to educate citizens about the hard-earned right to vote. The four-minute video features “Hamilton” original cast member Christopher Jackson, actors Billy Porter and Hill Harper and others reciting the words of voting-rights icons such as John Lewis and Frederick Douglass. Massey shows up just after tennis great Billie Jean King repeats the words of the late Ruth Bader Ginsburg.

Her secret to long life: “I didn’t miss having fun growing up. I played a lot of sports. Clean living,” she said.