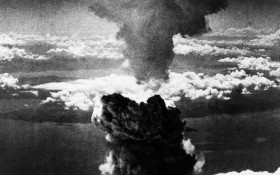 A shocking new video has Coloradans scrambling for the phone, and has the Democrats in the state fuming. A conservative group is airing an ad showing kids counting down to a mushroom cloud to slam Democratic Sen. Michael Bennet of Colorado over the Iran nuclear deal.

The ad by the group Advancing Colorado shows children counting down from 10 in different languages, then a huge explosion and billowing cloud. Over charred and smoking rubble it claims that Bennet is “jeopardizing our safety” by backing the deal.

The ad offers a taste of how the GOP may seek to use the Iran issue politically after Senate Democrats including Bennet blocked Republican attempts to unravel the deal. Bennet is up for re-election next year in a competitive state, and is the most vulnerable Senate Democrat this cycle.

The accord backed by the Obama administration aims to provide billions in relief from economic sanctions for Iran, while Republicans say the nuclear deal it will serve only to empower Iran.

The incendiary ad is reminiscent of the famous “Daisy ad” that President Lyndon Johnson used against Republican opponent Barry Goldwater in 1964. Johnson’s ad showed a little girl picking daisy petals, then a billowing mushroom cloud. Johnson was trying to portray Goldwater as a warmonger over Vietnam.

Jonathan Lockwood, executive director of Advancing California, said the in-your-face approach was appropriate to tell voters about Bennet’s role in a dangerous agreement. “The consequences of this deal are going to be even more shocking than this ad,” said Lockwood.

Lockwood, who formerly ran the conservative billionaire Koch Brothers’ Colorado young voter outreach organization, said Advancing Colorado is not funded by the Koch Brothers. He said the ad buy was six figures, including broadcast stations in Denver starting Tuesday, and online and digital.