WOW! Obama and his pals STUNNED by this news (he's furious!) - The Horn News 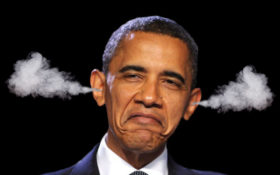 The legacy of former President Barack Obama depends upon the Iran nuclear deal staying intact. President Donald Trump knew the deal was not working with the U.S. and ended it last week — but pro-Obama allies in Europe have been trying to save their end of the bargin.

A new revelation may put an end to that once and for all.

Iran’s Foreign Ministry Spokesman Hossein Jaberi Ansari reported that if liberal officials in the U.S. and Europe do not put maximum pressure on the Trump administration, he was going to name-names of the Obama insiders that were bribed to get the deal passed.

According to USA Today, Obama reportedly spoke out on Trump’s ending to the nuclear deal by saying his decision was “misguided.”

Obama and his former officials have expressed extreme frustration over their deal being officially ended. Obama considered it a cornerstone of his legacy.

It’s all coming apart now — and experts are saying it could get very, very interesting.

H.J.Ansari Zarif’s senior advisor: “If Europeans stop trading with Iran and don’t put pressure on US then we will reveal which western politicians and how much money they had received during nuclear negotiations to make #IranDeal happen.”
That would be interesting.#JCPOA

In 2015, FrontPage Mag reported that multiple Democratic senators and Obama insiders were paid by the Iran lobby to support the nuclear deal.

Among those Senators were Al Franken and Kirsten Gillibrand… no surprise there.

But who else was involved in the U.S. — and in Europe? We may find out.

If Iran holds true to their threat, several other countries may be forced to pull out of the deal before they are exposed for their part in bribery.

Obama’s legacy is crashing down in flames — and we cannot help but sit back and enjoy it.