How was YOUR day? This family lost $9 BILLION - The Horn News 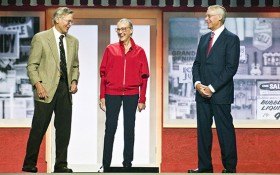 The four heirs to Sam Walton, the founder of Wal-Mart, control more than half the company shares.

That means the Walton family — Christy, Jim, Alice and Rob– saw over $9 billion of their fortune evaporate… in just one day. Wednesday saw Wal-Mart stock have its biggest one-day drop in nearly three decades.

The company is forecasting its profit to fall by as much as 12 percent in its next fiscal year as it perks up customer service and adapts to changing shopping habits. It also expects sales for this full fiscal year to be flat, hurt by unfavorable currency exchange rates. Wal-Mart had previously forecast sales growth of 1 to 2 percent.

The disappointing guidance comes as Wal-Mart Stores Inc. works to fix its business amid pressure from rivals including traditional grocers, dollar stores and Amazon.com. At its annual meeting in New York City Wednesday, CEO Doug McMillon sought to reassure investors that that the profit decline next year is part of its plans to position for the future.

“We all know that retail has changed and will continue to change at an accelerating pace,” said McMillon, who took the job in February 2014.

Under McMillon, Wal-Mart has accelerated the openings of smaller stores, which tend to be more conveniently located and let customers get in and out faster. On Wednesday, it also said it was expanding its online grocery with free pickup to 10 additional markets, making the service available in a total of 20 markets in the U.S.

Such moves, along with a push to improve the cleanliness of its U.S. stores, are expected to help attract more higher-income customers than in the past, McMillon said. But he noted the company would also remain focused on shoppers who are driven by low prices.

Wal-Mart is under pressure on that front as well, with smaller discounters posing a greater threat. The company said its store brands, which tend to cost less, will play a key role in making it more competitive with discounters.

Greg Foran, who took over as CEO of Wal-Mart’s U.S. division last year, also noted on Wednesday the company’s commitment to delivering low prices while running a tighter ship.

Instead of throwing away a princess costume for Halloween that is missing its crown, for instance, he said stores would mark it down to a lower price.

He said Wal-Mart customers would be “happy” to pay less for such an item.

More broadly, Foran is spearheading a major overhaul of the U.S. division, which accounts for 60 percent of the company’s total business. That includes basics like making sure stores are cleaner and well stocked. The stores have been criticized for messy aisles and not having enough workers to restock shelves.

For its fiscal 2017, Wal-Mart expects earnings per share to be down 6 to 12 percent. The company attributed a big portion of the decline to its plan on raising wages and providing more training for workers, which Wal-Mart hopes will lead to improved service.

Wal-Mart, which is also facing pressure from worker groups calling for better pay, increased its minimum wages for U.S. employees to $9 per hour in April. The figure will rise to $10 per hour by February 2016.

While the company’s increased investments have helped to perk up sales and traffic at its stores, they’ve squeezed profits. In early October, it laid off 450 workers at its corporate headquarters as part of a push to become more nimble. There are more than 18,000 people who work at the headquarters in Bentonville, Arkansas.

By fiscal 2019, the company expects earnings per share to be up 5 to 10 percent from this year.

The company on Wednesday also said it authorized a $20 billion share buyback program for the next two years.