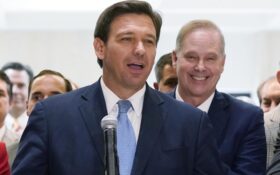 But there’s a political landmine waiting in the aftermath of Hurricane Ian that could undo DeSantis’ hopes of national office — one that claimed a prior-GOP front runner just a few years ahead of his failed 2016 presidential campaign.

President Joe Biden is heading down to Florida to meet with DeSantis and the two will survey the damage from last weeks deadly storm.

It’s a rare bipartisan effort from DeSantis, who is putting politics aside for the sake of Floridians.

But it could also potentially backfire. Critics will recall the outrage when former New Jersey Gov. Chris Christie hugged former President Barack Obama in an awkward moment after Hurricane Sandy devastated the state’s shoreline in 2012.

Republican voters were not impressed — and Christie, who was considered a front-runner for the 2016 Republican presidential nomination at the time, never recovered.

Biden had recently assured told reporters that DeSantis was “thrilled” with his administration’s efforts before and after Hurricane Ian hit the Sunshine State.

“He complimented me. He thanked me for the immediate response we had. He told me how much he appreciated it,” Biden said. He told reporters he talked with DeSantis “four or five times.”

“He said he was extremely happy with what’s going on,” Biden said.