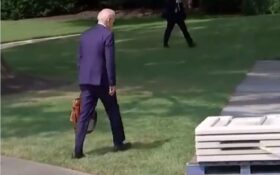 President Joe Biden enjoyed a long weekend and even stopped working at 11:27 a.m. on Monday.

Biden had reportedly hoped to extend his time in Wilmington, Delaware into a two-week vacation but traveled back to the White House on Tuesday night during the Senate’s vote on the infrastructure bill.

And footage of his return to Washington, D.C. left many Americans scratching their heads.

The British newspaper The Sun obtained video of Biden arriving at the White House on Tuesday. Biden walks onto the White House lawn. Then, a Secret Service officer says something and points.

Biden doesn’t respond and walks past the seemingly befuddled agent.

You can watch the video below. Is Biden ignoring the Secret Service’s request to avoid walking on the lawn?

Biden’s changing vacation plans reflect not only the state of the bill, but also the president’s own penchant to change his mind.

Earlier this summer, there was some discussion of Biden making a vacation to a national park to encourage Americans to travel safely, according to aides.

He has privately admitted to being homesick. There has been some criticism of his frequent travel back home, conducted at taxpayer expense.

Biden has privately told his aides that he feels more comfortable in Delaware than in the White House.

“Because it’s his home,” said White House press secretary Jen Psaki last week, when questioned why Biden traveled back to Wilmington so often.

“You like going home, right? So, does the President. He’s human too.”

Other aides advocated an extended stay at Camp David, the official presidential retreat in Maryland’s Catoctin Mountains, a remote and secure forested facility where a photo of Biden playing a Mario Kart arcade game with his granddaughter went viral earlier this year.

Like his predecessors, Biden travels with a large entourage of aides, Secret Service agents, and journalists in an unmistakable motorcade of more than a dozen dark vehicles. Even when on a so-called vacation, presidents are still receiving briefings on national security, the economy, and other issues like attending to matters of state and mapping future plans.

In total, Biden had aimed to take two weeks away from Washington. But thanks to the Senate, Biden now will not make his return to Wilmington until later this week and then spend the weekend at Camp David, according to officials.

It is not yet clear where he will spend next week. Pack accordingly.

The Horn News editorial team and The Associated Press contributed to this article.