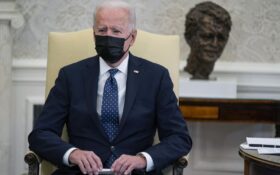 Washington, D.C. has been abuzz this week.

But President Joe Biden decided to take the day off Monday, calling a surprisingly early “lid” after a 10:00 a.m. press conference that announced new sanctions against the Belarus leadership.

It effectively ended his day in the public.

Meanwhile, the wheels of government continued to turn without Biden returning to the White House.

The White House announced on Monday that the United States is levying new sanctions against Belarus, marking the one-year anniversary of Alexander Lukashenko’s election as president in an election that the U.S. and international community have said was fraught with irregularities.

A Pentagon spokesman told reporters later that day the U.S. military would not be stepping up airstrikes in Afghanistan despite accelerating Taliban gains there.

Senior members of the Biden administration were simultaneously traveling to Mexico for talks on addressing illegal migration to the U.S., according to the White House. The talks formally started Tuesday.

And in the U.S. Senate, a historic $1.2 trillion infrastructure deal — one of the largest and most expensive new spending projects in nearly a century — was reaching the end of negotiations. The bill, which allows for over $550 billion in new spending, passed in a bipartisan vote on Tuesday, 69-30. 19 Republicans crossed party lines to vote with all 50 Democrats. It heads to the House of Representatives now for final passage.

So where was Biden during all this?

Still in Delaware, seemingly taking the day off after the early morning press conference.

That meant Biden would not meet with reporters or answer questions for the rest of the day.

Joe Biden did not return from Delaware today and we have had consecutive days with no public events and early press lids. We have no further guidance on POTUS’s movements for the rest of the week.

This new Fox News star will give Joe Biden headaches