This announcement will make liberal voters furious - The Horn News 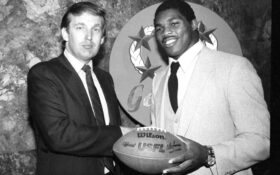 After months of setbacks, Republicans may have found their winning play.

For 35 years, Walker’s name has been synonymous with excitement—on the playing field and off.

Walker overcame childhood bullying to become the three-time All American and Heisman Trophy winning running back and top-notch football pro whose career took him from the upstart USFL to the NFL’s Dallas Cowboys, New York Giants, Philadelphia Eagles, and Minnesota Vikings.

He gained a record-breaking 8,225 yards on the field.

And during his stint for the USFL’s New Jersey Generals, he became lifelong friends with its owner, former President Donald J. Trump.

Walker said last summer that he takes it as “a personal insult, that people would think I’ve had a 37-year friendship with a racist.”

“It hurts my soul,” he told the 2020 Republican National Convention.

The former president has been the most vocal person urging Walker to throw his helmet in the ring.

“Wouldn’t it be fantastic if the legendary Herschel Walker ran for the United States Senate in Georgia?” Trump asked. “He would be unstoppable, just like he was when he played for the Georgia Bulldogs, and in the NFL.”

He won the hatred of the Democratic establishment when he backed Republican Brian Kemp over Democrat Stacey Abrams in 2018—and again when he threw his support behind Kelly Loeffler instead of Raphael Warnock last year.

Now, he may just pick up the ball Loeffler fumbled and run it into the end zone himself.

And true to his NFL career, even though he’s not in the race, Walker is still the front-runner.

A poll by the Trafalgar Group taken in March shows Herschel Walker would defeat his Republican primary opponents—including Loeffler, Then, he’d beat Warnock in the general election, 48 percent to 46 percent.

Walker, who broke plenty of tackles on the field, backed down from controversial political issues.

He testified before Congress that giving 21st century black Americans “reparations” for 19th century slavery is an outlandish—and sinful—idea.

“My approach is biblical: How can I ask my Heavenly Father to forgive me if I can’t forgive my brother?” he told the House Judiciary Subcommittee on the Constitution, Civil Rights, and Civil Liberties.

“Reparation is only feeding you for a day,” Walker said. Black Americans deserve a safe community, good schools, and real job opportunities that will give them a fair shot at the American dream.

Unlike Warnock—a socialist Democrat who thinks America is infected with “systemic racism”—Walker is a patriotic American.

Walker said he “loves and respects the flag, our National Anthem, and our country,” and he also cares “about social justice”—and he supports Republican policies that would rebuild the inner city, he said.

“America is the greatest country in the world,” he said.

Now, Walker is taking on the most powerful corporations in the world over Georgia’s voter integrity laws.

He threw down a major challenge to left-wing business barons: Instead of boycotting the state for requiring a state-issued ID from voters, big businesses could help poor people get those IDs.

Let's empower Georgians without ID to get one.. you need ID to drive, cash a check, open a bank account -almost anything to function in life today! Makes better sense to improve lives! Walker challenges companies, CEOs to help people get voter IDs https://t.co/90wyjgVlsk

Walker may be just the player the GOP needs to turn around its losing season. The last five months have been lousy for conservatives.

The most liberal administration in American history replaced President Trump in January. Then two radical leftists —Warnock and Jon Ossoff—won the Senate for Democrats in Georgia’s run-off election.

Walker could change all that. In fact, the 2022 midterm elections could cement the GOP as the party of black Americans.

If Walker wins and Sen. Tim Scott from neighboring South Carolina is reelected—which is virtually guaranteed—the Republican Party will have more black U.S. senators than the Democratic Party.

Former President Trump, who attracted more black support than any Republican in a generation, also gave his strongest support to Scott for his 2022 bid… and is said to be considering Scott as his vice president if he runs again in 2024.

A Georgia win could be the beginning of a political realignment that brings the working-class — whites and blacks — together under a revived GOP.

Herschel Walker could be the Republican Party’s MVP in 2022.