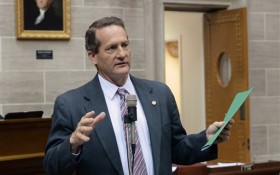 A legislator from the St. Louis area abruptly resigned from the Missouri House on Wednesday, citing rumors about “some personal issues” as he became the third lawmaker to quit under pressure within the past year.

Republican Rep. Don Gosen of Chesterfield did not offer a specific explanation, either in an interview with The Associated Press or in his official resignation letter to Missouri House Speaker Todd Richardson. He did tell the AP that the issues did not involve a relationship with an intern or staff member — scenarios that led to the downfall of two lawmakers last year.

“There’ve been some rumors, stories floating around the Capitol the last week — some true, some not true,” Gosen told the AP. “And with those come some personal issues that I’m addressing at home — none of those related to legislative duties, legislative activities.”

Richardson said in a written statement that he asked Gosen to resign Tuesday night. He suggested Gosen had been involved in something inappropriate, but he wasn’t specific.

“At the beginning of this year, I said the actions of this body would not be defined by a few. I was serious then, and I am serious now,” said Richardson, a Republican from Poplar Bluff. “That’s why when I was made aware of the situation, I asked him to resign last night.”

Richardson declined to elaborate on Gosen’s “situation” when talking to reporters later Wednesday. He also declined to say whether a House ethics complaint had been filed against Gosen, noting that such complaints are confidential under House rules.

Richardson has tried to place a greater emphasis on ethical behavior by lawmakers after ascending to the House’s top leadership position following the resignation last May of Republican House Speaker John Diehl, who quit under mounting pressure after acknowledging he had exchanged sexually charged text messages with a Capitol intern.

A couple of months later, Democratic Sen. Paul LeVota, of Independence, also resigned under pressure after being accused of sexually harassing interns. LeVota has denied the accusations.

“My job is — as it’s been before in a similar position — to get the House back to work, and that’s what we’re going to do,” Richardson said.

Gosen, 53, was elected to the House in 2010 and was chairman of the House Select Committee on Insurance. He is a married a father of three children who has been an insurance agent for the past 20 years. He also co-owns a brewing company, according to his House biography.

Gosen told the AP he was leaving the Capitol on Wednesday and planned to visit his mother.

“Everything I’m dealing with right now is strictly of a personal nature — you know, to be handled there — and that’s kind of the extent of that,” he said.

Some colleagues expressed surprise at Gosen’s resignation. Democratic Rep. Bob Burns, of St. Louis area, described Gosen as “an upstanding man” and good friend who as a committee chairman was “very fair and honest.”

Republican Rep. Tom Flanigan, of Carthage, said the recent troubles involving House members show that Missouri’s 197 lawmakers are similar to the cross-section of people they represent — for better or worse.

“This Legislature is a microcosm,” Flanigan said. “Some people who are representative have character flaws, or have flaws, that get played out when they come up here.”