What was he thinking? Soldier arrested after bizarre base shooting - The Horn News 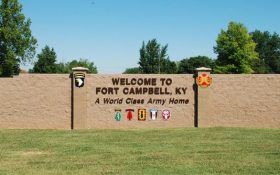 Army officials in Kentucky say a 101st Airborne Division soldier fired two shots at Fort Campbell and then fled in his vehicle before being apprehended by military police.

He tried to continue home like nothing had happened.

Fort Campbell spokesman Robert Jenkins said in a news release that the soldier entered a hangar at Campbell Army Airfield about 11:30 a.m. Thursday and fired the shots. No injuries were reported.

Jenkins said the soldier fled in his vehicle and was followed by post law enforcement. He did not identify him.

The spokesman said during the pursuit, the soldier hit another vehicle but continued to his home on the post. He tried to get out of the vehicle but was apprehended. He said no motive was known.