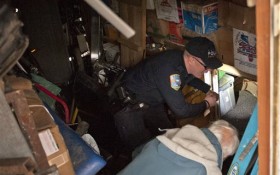 Authorities arrested a fugitive convicted on drug and theft charges after finding him hiding this week in what they called an “elaborate tunnel system” dug underneath a trailer home in Alaska.

The tunnels narrowed as officers walked further in, forcing them to trudge through on their knees and then on their stomachs. Police in the city of Sitka say they eventually spotted Jeremy Beebe’s foot sticking out of another hidden entrance, catching him after an officer pulled back the skirting around the trailer.

Police Lt. Lance Ewers said Beebe, 42, had failed to report to the police department on Jan. 12 after he was sentenced to nearly two years in prison, the Sitka Sentinel reported.

Acting on a tip, officers staked out a trailer park Wednesday and saw Beebe heading in to one of the units. A woman who answered the door said Beebe was not there.

Police then used a battering ram to get through a plywood door they found on the outside of the trailer, which led to the tunnel system.

Beebe was arrested and may face additional charges of contempt of court, Ewers said.

Jude Pate, a public defender in Sitka assigned to Beebe’s case, declined to comment when reached by The Associated Press on Thursday.