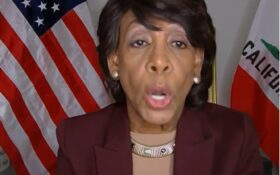 For decades, Rep. Maxine Waters, D-Calif., has been sowing discord within Democrat Party… but she’s outdone herself this time.

On Sunday, Waters went on MSNBC to discuss the Democrats’ Freedom To Vote Act — and it didn’t take long before she accused two Senate Democrats of having sympathy toward racism.

“They don’t care about us,” Waters said of Sens. Kyrsten Sinema of Arizona and Joe Manchin of West Virginia.

Waters took issue with these two senators for preserving the 215-year-old Senate filibuster.

President Joe Biden campaigned for so-called “voting rights” in Atlanta last week. In his speech, he endorsed a filibuster carve-out, a proposal that would allow the Senate Democrats to force through their radical voting bills with only 50 votes, rather than 60.

Later that day, Manchin and Sinema each voiced their opposition to Biden’s filibuster plan.

We have two Democrats — Manchin and Sinema — and they are holding up the Democratic agenda.

They have decided that they are going to stick with support of the filibuster, and they don’t care whether or not they undermine the rights of minorities or Blacks in this country.

They don’t care what it means to weaken our ability to participate in this democracy.

Waters ignored these two senators’ rationale for supporting the filibuster.

Manchin has worried that a carve-out for election reform would offer the Democrats a short-term gain for long-term disadvantages. He’s said that the Senate Republicans exploited the Democrats’ previous carve-out.

Manchin wants future success for the Democrats — far from “holding up the Democratic agenda.”

Everyday Arizonans are focused on questions that matter most in their daily lives.

Is my job secure? Can I expand my business? Can we afford college? What about health care? When can I retire? Is my community safe?

Meanwhile, much of Washington’s focus is on a Senate rule requiring 60 votes to advance most legislation.

Waters failed to address these facts.

She also spoke as if every other Senate Democrat, other than Manchin and Sinema, was on board with the voting bills and with Biden’s filibuster plan.

This isn’t the first time that Waters has lobbed divisive, racialized accusations at other Democrats.

She once even accused former President Barack Obama of focusing too little on Black unemployment.

In 2011, she told a town hall, “When you tell [Black voters] it’s all right, and you unleash us, and you tell us you’re ready for us to have this conversation… we’re ready to have the conversation.”

Now, over a decade later, Waters is grumbling again — not only at the Republicans, but also at her own allies.