Mitch McConnell has a message for Schumer - The Horn News 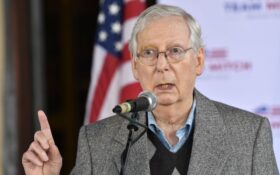 What’s more, Schumer’s plan was likely doomed from the start… even before McConnell.

Schumer opened by drawing a dubious connection between the Capitol raid, the ballot integrity measures in red states, and former President Donald Trump’s refusal to concede the 2020 election.

Schumer especially took issue with Republican obstruction to the Freedom To Vote Act, a controversial bill that would federalize every state-level.

“Our Republican colleagues have gone to great lengths recently to distract from the dangers of Donald Trump’s big lie,” Schumer said on the Senate floor Monday.

“By blocking these chambers from taking any action, Senate Republicans are implicitly offering their own endorsement of the big lie.”

Schumer would need 60 votes in order to ram the Freedom To Vote Act through the Senate. Otherwise, any Senator can block the bill by starting a filibuster.

Schumer has given up on courting 10 Republican votes. Instead, he is trying to change the filibuster rules.

Schumer plans to call a vote on the filibuster rules by the middle of January, according to a Senate memo obtained by the Wall Street Journal.

He has refused to rule out the “nuclear option”: abolishing the filibuster.

McConnell had something to say.

First, he accused Schumer of trying to “silence the voices of millions and millions of Americans.” McConnell referred to the filibuster as a measure intended to prevent the majority party from steamrolling the minority party.

Then, McConnell threatened to bring the Senate to a screeching halt just to stop Schumer.

The Senate often requires unanimous consent for day-to-day operations, and McConnell vowed to withhold his support in the event of any changes to the filibuster.

Our colleagues who are itching for a procedural nuclear winter have not even begun to contemplate how it would look… What would a post-nuclear Senate look like?

I assure you it would not be more efficient or more productive. I personally guarantee it.

McConnell may enjoy wrestling Schumer in “procedural nuclear winter. However, he probably won’t need to. Schumer doesn’t have enough votes to change the filibuster.

To make rule changes, Schumer would need 50 votes, in a Senate divided 50-50 between Democrats and Republicans. Schumer likely faces universal opposition from Republicans… and he certainly faces internal divisions within his own party.

Two Senate Democrats — Joe Manchin of West Virginia and Kysten Sinema of Arizona — have expressed opposition to any rule changes, including President Joe Biden’s “moderate” plan to carve out an exception for the Senate’s voter ID bill.

On Tuesday, Manchin vowed to vote only for bipartisan changes to the filibuster.

He reporters, “We need some good rules changes. We can do that together. But you change the rules with two-thirds of the people that are present so… Democrats, Republicans changing the rules to make the place work better. Getting rid of the filibuster doesn’t make it work better.”

Manchin has also spoken ill of the Senate’s previous “carve-outs” for the filibuster. According to Manchin, McConnell used the Democrats’ 2013 carve-out to his own advantage.

Manchin said on Fox News Sunday last year, “2017, Mitch McConnell’s in control, comes right back in. And guess what? That carve-out worked to really carve us up pretty bad.”

Sinema has yet to comment about Biden’s proposal, but she expressed “support for retaining the 60-vote threshold” for The Washington Post last year.

Plus, some Senate Democrats support filibuster reform in theory but may retain reservations about Biden’s particular plan for it. For example, Senate Majority Whip Dick Durbin, D-Ill., called for a return to the “standing filibuster” in a press release last year, but he didn’t mention any “carve-outs.”

In other words, Schumer may have invoked the wrath of McConnell for no reason at all.