These states vote in important protections for Christianity - The Horn News 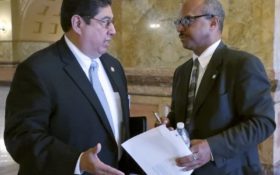 State lawmakers in Kansas and Oklahoma have approved legislation to grant legal protections to faith-based adoption agencies that cite their religious beliefs for not placing children in LGBT homes.

Supporters of such measures argued that the core issue is protecting a group’s right to live out its religious faith, while critics saw them as attacks on LGBT rights. Both Kansas and Oklahoma have GOP-controlled legislatures and governors, but in Kansas, the proposal split Republicans.

The Kansas Senate approved a bill early Friday morning, 24-15, that would prevent faith-based agencies from being barred from providing foster care or adoption services for the state if they refuse to place children in homes violating their “sincerely held” religious beliefs. The House had approved it late Thursday, 63-58.

The action in Kansas came after the Oklahoma House voted 56-21 for a similar measure, sending it to Gov. Mary Fallin, who has not said whether she would sign it. Kansas Gov. Jeff Colyer supported his state’s legislation, with his administration arguing that it would encourage faith-based groups to place more abused and neglected children in state custody.

Backers of the Kansas bill acknowledged that faith-based agencies have been operating in Kansas for decades without issue. But they fear that lawsuits or turnover among state officials could result in an environment hostile to some religious groups’ views. A few saw vocal opposition from LGBT-rights advocates as evidence that a shift could be coming.

“There is no homosexual agenda — I was told that, when people were saying that there was one, and now we find out, there is an agenda,” said Kansas state Sen. Steve Fitzgerald, a conservative Leavenworth Republican. “What was once tolerated is now becoming dominant and is intolerant — totally intolerant.”

LGBT-rights advocates argue that enacting such a law would sanction discrimination and support it with taxpayer dollars.

TechNet, representing some of the biggest names in tech, including Apple and Google, sent a letter to lawmakers in both states opposing their measures. Critics in Kansas worried that it would make the state look backward and even suggested it could hurt the economy.

“It’s going to say, ’Well, there goes Kansas. They’re going to do something regressive, something discriminatory,” said Kansas state Sen. David Haley, a Kansas City Democrat. “Something like this is not healthy.”

The Oklahoma bill cleared the GOP-controlled Legislature over the boisterous objections of Democrats. At one point, the chamber’s presiding officer threatened to have a member forcibly removed.

Texas, Alabama, South Dakota, Virginia and Michigan already have such laws in place. Michigan’s ACLU chapter took the state to court last year over its adoption law, and the case is still ongoing.

In 2011, Illinois declined to renew its state contract with Catholic Charities adoption services due to its policy of refusing child placement to same-sex couples. Catholic Charities has also stopped handling adoptions in Washington D.C., Massachusetts and San Francisco over concerns they would be required to act against their religious beliefs.

In Kansas, both sides of the debate agree that the state’s foster care system is overloaded. The number of kids in need of homes has grown every year since 2008, from 5,711 to 7,540 as of March, according to the Department of Children and Families.

Supporters said that passing the measure could encourage groups providing limited services for the state or doing only private adoptions to work more with the state. Colyer’s administration has said some out-of-state agencies could be attracted to Kansas.

“I believe this bill aids and gets more people involved in the system,” he said.

But critics like Lori Ross, president of Foster Adopt Connect, a child placement agency operating in Kansas and Missouri, contend the real problem is a lack of available families.

Ross said for LGBT families looking to adopt, it isn’t always obvious which agencies will work with them and which won’t, she said. If they make that first phone call and get denied, they may never try and adopt again.

“If you’re a single person, or a gay person, or a divorced person, or you’re Jewish, then you better think twice before you call,” Ross said.