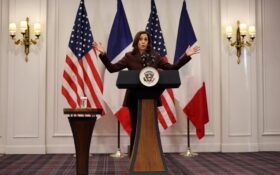 On Monday morning, Vice President Kamala Harris reportedly escaped a car accident with no injuries… but not many people heard about it.

The Secret Service remained quiet on the incident until Wednesday night, and the agency gave conflicting explanations for the collision.

After the accident, the agency couldn’t keep the incident under wraps for long. By Monday evening, witnesses had already leaked videos to the press.

One viral video shows a motorcade stopped outside a tunnel apparently in Foggy Bottom, the D.C. neighborhood home to Harris’ office.

The video never shows Harris herself, and it came from TikTok, a haven for fake news.

But the footage matches the Secret Service’s description of the event.

“Hi, Kamala! She was in the car that crashed,” one person said in the video. “That’s f**king insane. We saw her.”

“The guy seemed drunk,” another voice speculated on video. “Yeah! He was.”

The Washington Post reported the story first. Two insiders told a reporter that Harris’ vehicle had collided with the curb in Foggy Bottom at around 10:20.

At first, the agency described car trouble resulting from a “mechanical failure,” according to the Post, and the agency moved Harris to a different car on the way to the White House.

The following afternoon, Secret Service Director Kim Cheatle released the real reason for the crash. In reality, the Secret Service driver appears to have overcorrected while steering.

“Secret Service Director Kim Cheatle received information from other agents that the alert did not accurately convey what happened, one of the people said. In fact, many other Secret Service agents on Harris’s detail and at the White House, as well as Harris, knew her driver had actually hit the side pavement of a tunnel,” the Post reported.

Secret Service spokesman Anthony Guglielmi told the Post, “Initial radio traffic indicated this was a mechanical failure, and that was communicated to agency leadership by personnel supporting the motorcade movement,” he said. “After the protective movement was completed, leadership was verbally updated with additional pertinent facts that the vehicle struck a curb.”

The spokesman also defended the agency’s initial response, according to the Post. He claimed that the underlings had provided more accurate details during in-person conversations with their superiors.

“The Vice President sustained no injuries and appreciates the quick response by her USSS detail to get her to the White House safely,” Kirsten Allen, a spokeswoman for Harris, told the paper in an emailed statement.