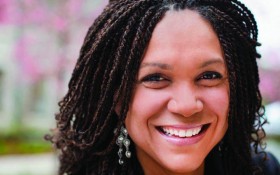 While Perry and guest Alfonso Aguilar discussed speaker Paul Ryan, the MSNBC host cautioned that using the phrase “hard worker” might be offensive to African-Americans, because it could remind them that their ancestors may have been slaves.

Perry said, “I just want to pause on one thing because I don’t disagree with you that I actually think Mr. Ryan is a great choice for this role, but I want us to be super careful when we use the language ‘hard worker.'”

“I actually keep an image of folks working in cotton fields on my office wall because it is a reminder about what hard work looks like.”

Perry gained notoriety when she decided to wear tampons as earrings in 2013 in support of protesters that were attempting to throw tampons at Texas pro-life lawmakers.

You can see the video of Perry claiming hard workers is a racist term below: