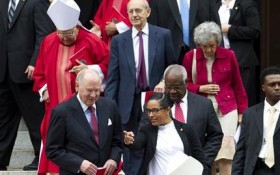 Good news for conservatives is expected from the Supreme Court this coming term. The highest court in the land is facing a steady stream of divisive social issues, and legal experts expect a brighter prospect for conservatives who suffered more losses than usual in recent months.

The justices are meeting in public Monday for the first time since a number of high-profile decisions in June that displayed passionate, sometimes barbed disagreements and suggested some bruised feelings among the nine judges.

The first case before the court involves a California woman who lost her legs in a horrific accident after she fell while attempting to board a train in Innsbruck, Austria. The issue is whether she can sue the state-owned Austrian railway in U.S. courts. The court also is expected to reject hundreds of appeals that piled up over the summer.

Future cases will deal with abortion, religious objections to birth control, race in college admissions and the power of public-sector unions. Cases on immigration and state restrictions on voting also could make it to the court in the next nine months.

The term will play out against the backdrop of the presidential campaign, in which some candidates are talking pointedly about the justices and the prospect of replacing some of them in the next few years. Four justices are in their 80s or late 70s, led by 82-year-old Ruth Bader Ginsburg.

Commentators on the left and right say the lineup of cases suggests that conservatives will win more often than they will lose over the next few months, in contrast to the liberal side’s success last term in gay marriage, health care and housing discrimination, among others.

“This term, I’d expect a return to the norm, in which the right side of the court wins the majority, but by no means all of the cases,” said Georgetown University law school’s Irv Gornstein.

One reason for the confidence is that, as Supreme Court lawyer John Elwood said: “This is a term of sequels.” Affirmative action and union fees have been at the court in recent terms and the justices’ positions are more or less known.

The larger question is whether there are majorities for major rulings that, for example, would all but outlaw the use of race in admissions or declare that workers’ free-speech rights preclude unions from collecting any money from non-members. Both cases also could produce narrower outcomes that would be less damaging to affirmative action and unions.

No single case before the justices in the new term holds the significance of the court’s 5-4 decision in June that extended the right to marriage to gay and lesbian couples nationwide.

But the author of that opinion, Justice Anthony Kennedy, probably will play a similarly decisive role in the most important cases to be heard by the court. “On issue after issue, Kennedy provides the deciding vote,” said conservative commentator Ed Whelan, no fan of Kennedy.

Conservative ire over some Kennedy opinions is almost routine. But Chief Justice John Roberts, who marked his 10th anniversary on the court this year, also has faced intense criticism from conservative quarters, mainly for his two votes in favor of the Obama health care overhaul. In a Republican presidential debate last month, Texas Sen. Ted Cruz called Roberts’ appointment to the court a mistake. Even former Florida Gov. Jeb Bush hesitated when asked whether he agreed with Cruz. Bush’s brother, President George W. Bush, nominated Roberts in 2005.

Former Attorney General Edwin Meese and 68 prominent conservatives issued a memo Friday that mentions Samuel Alito, Antonin Scalia and Clarence Thomas as the kind of justices the next Republican president should fight for. There was no mention of Roberts.

Alito alluded to tension among the justices in a speech at the University of Kentucky last month. By late June, “We tend to be kind of angry with each other,” Alito said.