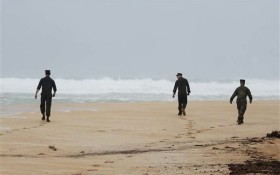 Authorities searching the area where two Marine helicopters crashed off Hawaii have found some life rafts that were carried aboard the aircraft, but still no sign of the 12 crew members who were on board.

Coast Guard Chief Petty Officer Sara Mooers said Monday she believes three life rafts have been recovered so far. Some were inflated, but it was unclear how they came to be inflated, she said.

The search for the Marines entered its fourth day Monday. Mooers said at this point, it is still a search for survivors.

Rescuers from various agencies have been searching round-the-clock since the Coast Guard was notified late Thursday of the crash by a civilian who saw the aircraft flying and then disappear and a fireball.

The Marines were alerted when the CH-53E helicopters carrying six crew members each failed to return to their base at Kaneohe Bay following a nighttime training mission. Hours later, a Coast Guard helicopter and C-130 airplane spotted debris 2 1/2 miles off of Oahu.

The transport helicopters were part of the 1st Marine Aircraft Wing at Marine Corps Base Hawaii. Known as Super Stallions, they are the U.S. military’s largest helicopter, capable of carrying a light armored vehicle, 16 tons of cargo or a team of combat-equipped Marines, according to a Marine Corps website.

The wing’s commanding general, Brig. Gen. Russell Sanborn, told reporters Sunday he has personal experience with the “emotional roller coaster” families of the 12 Marines are experiencing.

His wife went through similar emotions when he was shot down 25 years ago during Operation Desert Storm and was listed as missing in action, he said.

The Coast Guard initially reported that the choppers had collided, but Marine Capt. Timothy Irish said Friday that he did not know if the accident was a collision.

“We think they collided because both of them went down,” Mario Vittone, a retired Coast Guardsman who is an expert on sea survival, said Sunday from Florida.

It would have happened very quickly and survival would entail overcoming many factors.

A high surf warning for Oahu’s north and west shores was extended until noon Sunday, when it was downgraded to an advisory.

Waves along north-facing Oahu shores are expected to subside to 10 to 15 feet on Monday and decrease to 8 to 12 feet along west-facing shores.

It’s difficult to spot anything in breaking waves, said Vittone, who was a helicopter swimmer and marine accident investigator with the Coast Guard. “It almost like camouflages everything.”

The crash was off the north shore, but the search area was expanded to include waters off Oahu’s west coast Saturday.

The Coast Guard uses what’s called the Probability of Survival Decision Aid to gauge survival time he said, explaining that they factor in air temperature, water temperature, sea conditions and humidity, along with details about the victims.

“They use age and weight and sex and what they were wearing, along what gear they have on,” Vittone said.

Rescuers will continue to search “as long as there’s probable cause that they have something to find,” said Coast Guard spokeswoman Tara Molle. As of Sunday afternoon, there were no plans to call off or suspend the search, she said.

“Before we stop, we will notify all of the family members so they will have advance notice that we intend to stop,” Capt. James Jenkins, chief of staff for the 14th Coast Guard district in Honolulu, told reporters.

In addition to Coast Guard assets, the search effort includes Navy ships and aircraft, an Army helicopter, the National Guard, along with Honolulu’s fire, police and ocean safety personnel. Marine Corps members were combing the beach for debris.

Debris has been found “consistent with these types of aircraft,” Jenkins said.

Mooers said the helicopters also carry flight data recorders known as black boxes, although they have not been recovered.

The U.S. Marines Corps released the names of the 12 missing crew members late Saturday. Though based in Hawaii, the Marines were from various states.

Some family members were holding out hope that survivors could be found, while asking for privacy as they waited for updates.

“My husband and I want everyone to know that this is not about us,” Donna McGrew, mother of Maj. Shawn Campbell of College Station, Texas, said in a statement. “This is about the families that are suffering, and about all the sacrifices that our military members and their families make on a daily basis.”

The missing crew members are: