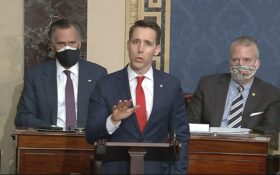 The 2022 midterm elections brought America’s two parties to a virtual dead-heat in both houses of Congress, with no clear endorsement from voters for either side.

It was a disappointment, to say the least, for Republicans. The Big Red Wave turned out to be the Republican Party drowning in its own self-doubt, contradictions, and broken promises.

If the GOP can’t win after two years of high inflation, rising gas prices, an uncontrolled border, rising fentanyl overdoses, and an administration led by two of the most unpopular figures in modern political history, when could they ever hope to win?

Now, one of the party’s most dynamic, up-and-coming leaders has said it’s time to face the reality that the Republican Party is dead, bury the remains, and bring it back to life with a platform that serves patriotism, freedom, and the middle class.

Senator Josh Hawley, R-Mo., delivered his party’s obituary just after the polls showed Democratic Nevada Senator Catherine Cortez Masto beating back Republican challenger Adam Laxalt, who had been considered one of the most likely candidates to flip a Democratic seat.

“The old party is dead. Time to bury it. Build something new,” he tweeted.

The old party is dead. Time to bury it. Build something new

“In particular, the folks who did not vote for Republicans in this last election were independent voters, working-class independent voters,” Hawley told an interviewer. The GOP increased its margins here and there, but it lost “folks who voted for Barack Obama once upon a time, folks who then voted for President Trump but stayed home this time. We are not a majority party unless we can appeal to those voters.”

Exit polls show Democrats won 77 percent of the most elite districts in America—the ones most likely to have advanced degrees, six-figure incomes, and “COEXIST” bumper stickers.

That’s not the only way the Democrats have a hammerlock on the rich. Democrats raised more money than Republicans in nine out of 10 swing Senate races, and 50 of the 65 tightest races in the House of Representatives.

The party of the rich now decks itself out in blue.

Hawley says, luckily, there are more middle- and working-class voters; and if the GOP embraces their causes and their values, it can win again.

“When your ‘agenda’ is cave to Big Pharma on insulin, cave to (Chuck) Schumer on gun control & Green New Deal (‘infrastructure’) … you lose,” Hawley wrote in a tweet.

“What are Republicans actually going to do for working people?” Hawley asked in a message on Twitter. “How about, to start: tougher tariffs on China, restore American jobs, open up American energy full throttle, 100k new cops on the street.”

That’s the agenda that saw Donald Trump bring a volcano of red up through the oil fields of Pennsylvania and Ohio, through the frozen Upper Midwest, into areas where the Democrats had frozen out the Wall Street Republican Party for decades.

He’s not kidding around—and he’s starting by cleaning up the Senate.

Hawley butted heads with Senate Majority Leader Mitch McConnell, R-Ky. When McConnell said he wanted to run for another term as party leader in that chamber, Hawley joined Marco Rubio and Ted Cruz in telling McConnell to hold off.

The leadership election should wait until all the Senate races are over—and Georgia’s run-off election doesn’t take place until next month.

When a reporter asked if Hawley would back McConnell staying on at the helm after two failed elections, the Missouri senator replied, “I don’t imagine I will. No.”

Hawley was one of 10 people who voted to replace McConnell with a more conservative challenger, Senator Rick Scott, R-Fla.

But Hawley also criticized Scott for some of his proposals, which not only got Republicans in hot water during the midterms but might cut into the bank accounts of elderly people or the disabled.

Scott proposed a plan to review all entitlement spending, including Social Security and Medicare, every five years. Joe Biden took up the Democrats’ “Medi-scare” attack—which is older than Biden—at each campaign stop he made for the rest of the campaign.

When you “tease changes to Social Security and Medicare, you lose,” he said.

But when you put middle-class voters first, you win. And Hawley may be leading the way for a long time to come.