THIS photo proves Jeb Bush is finished - The Horn News 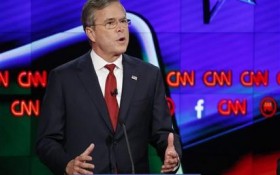 They say the Maytag repair man is the loneliest man in the world. But try telling that to this Jeb Bush supporter.

During this week’s GOP presidential debate, a photo leaked of a watch party among Bush supporters in Miami.

And let’s just say they didn’t exactly pack the place.

The photo is especially troubling for Bush, a former Florida governor who had counted on the state as a base of support.

But it’s clear that with little more than six weeks before voting begins, Bush is struggling for relevancy in a presidential election that has begun to leave him behind.

It wasn’t supposed to happen this way.

One year ago, Bush shook up the political world by declaring he would actively explore a presidential bid. Backed by much of the Republican establishment, the son and brother of former presidents quickly amassed a mountain of campaign cash — more than $100 million — that was supposed to scare off potential rivals and offer an easier path to his party’s presidential nomination.

Bush’s allies have spent more than a quarter of their massive fundraising haul running television ads for three consecutive months. Still, his weak poll numbers haven’t moved. And billionaire Donald Trump, who has spent by far the least of the major presidential candidates, is firmly entrenched as his party’s front-runner.

As the crowded 2016 Republican contest continues, Bush increasingly seems like a candidate whose time has passed.