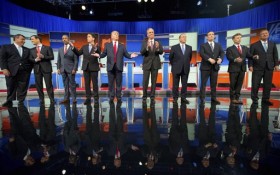 Tonight’s highly anticipated Republican debate will be a no-holds-bar slobber knocker compared to the first. At least two GOP candidates have vowed to attack front-runner Donald Trump: former Florida Gov. Jeb Bush, and Wisconsin Gov. Scott Walker. Who benefits most from this?

Dr. Ben Carson, who is all but guaranteed to come out a winner in tonight’s debate while the rest of the GOP candidates mud wrestle with Trump. The big win could catapult Carson straight to favorite status for the Republican nomination.

It’s partly because Carson is, in some ways, the anti-Trump – and it’s working. According to recent polls, voters are responding. The latest, released Tuesday by the New York Times, has Carson virtually tied for the lead with Trump moving into Wednesday’s debate.

Voters say they see Carson as a gentle candidate who lets his record as a renowned brain surgeon speak for itself. The bragging about his resume and place in the polls, on the rare occasions it comes, is delivered with none of the superlatives that Donald Trump can’t seem to go without.

Yet the 63-year-old Republican, the only African-American seeking the White House in 2016, has tapped into the same wave of anti-establishment outrage fueling the billionaire realty TV star’s rise.

“The likelihood of someone like me getting through this process and making it to president is virtually impossible,” Carson told The Associated Press in a recent interview. “I just have to be myself. And if being myself resonates with the American people, then they will choose me.

“And if it doesn’t,” he said, “they will choose somebody else.”

Like Trump, Carson was dismissed early as a gaffe-prone novice lacking a national profile and any significant political network. But he appears to be connecting with Republican voters at a rate that even his closest aides didn’t predict.

Heading into Wednesday night’s second debate of the GOP contest, Carson finds himself alongside Trump atop the field. And unlike during the last debate, Carson is expected to get significantly more air time this time around.

Wednesday night offers Carson a new chance to build on that momentum. A stage full of Republican candidates will face off at the Reagan Presidential Library for the party’s second formal debate. Carson emerged from the first as a surprise success, his popularity fueled by his nice-guy image on a night when his competitors came out swinging.

“My whole life people have told me you can’t do this, no one’s ever done this before, this is impossible,” Carson said. “I don’t even get charged up until I hear those words.”