The most popular Halloween costumes for 2015 are... - The Horn News 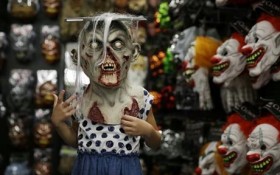 PARAMUS, N.J. (AP) — Expect to see a lot of Michelangelo, Donatello, Leonardo and Raphael this Halloween.

Some of the most popular costumes are expected to be based on the reptilian superheroes after the 2014 release of the film “Teenage Mutant Ninja Turtles,” according to Steven Silverstein, CEO of Spirit Halloween, a chain of more than 1,150 pop-up stores devoted to costumes and decor for the holiday. Children love the Turtles, and so do adults who watched them on TV and in movies when they were kids, he says.

Girls are expected to choose costumes based on the Disney TV movie, “The Descendants,” the story of the children of Disney characters such as Cruella De Vil and Cinderella.

Adult costumes and accessories based on TV shows like “The Walking Dead” and “Orange Is the New Black” are expected to sell well. Costumes based on superheroes like the Avengers or Batman should also be brisk sellers, Silverstein says.

And as usual, corsets and skimpy outfits for women are likely to attract a lot of partygoers. Risque costumes are big Halloween sellers.

For those with gorier tastes, Halloween fare also includes bloodied zombies and ghouls and characters from slasher movie classics like “Nightmare on Elm Street” and “Friday the 13th.”