The Hillary health scare NOBODY is talking about - The Horn News 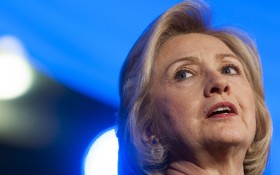 The mainstream media speculated about Ronald Reagan’s mental fitness, Dick Cheney’s heart, and whether John McCain could have a cancer relapse.

Clinton has a history of potentially serious blood clots — and is currently taking one of the most unpredictable prescription drugs on the market today.

Health questions have swirled around Clinton since a December 2012 fall that caused a concussion and led to a subsequent diagnosis of a blood clot near her brain. Clinton was knocked so hard she was seeing double for months – and had to wear glasses with special lines in them just so she could see straight.

Conservative political pundit Karl Rove was one of many who speculated that Clinton may have suffered brain damage in the fall.

Over the summer, Clinton tried to dismiss the persistent questions about her health by releasing a statement from her doctor that concludes: “She is in excellent physical condition and fit to serve as President of the United States.”

But the letter, which runs nearly two pages, could lead voters to draw the opposite conclusion – because it raises more issues than it answers, especially about Clinton’s clot history and the fact that she’s taking one of the most dangerous medications on the planet.

In humans, anyone taking it, even a president – especially a president – requires constant supervision, including regular tests to ensure the blood doesn’t get too thin.

When it does, you could literally bleed to death.

The risk is so great that a senior is rushed to the ER for a warfarin complication every 15 minutes, or more than 33,000 times a year. That makes warfarin responsible for more ER trips due to adverse events than any other drug, by far.

Even more concerning, this drug’s side effects include  severe headaches, fainting, coughing up blood, confusion, slurred speech and more.

Clinton appears to be prone to clots, which can lead to a stroke — something the media has talked little about. Her own doctor admitted that she suffered at least three clots (that we know of) in recent years. This included deep vein thrombosis in 1998 and 2009 (which usually occurs in the legs), and the third clot in 2012 that affected a vein that drains blood from the brain.

That clot could have led to a potentially fatal brain hemorrhage or stroke, doctors say.

Dr. Larry Goldstein, director of Duke University’s stroke center, told the Associated Press that getting this type of clot was “not the most common thing” after a concussion. He explained that the clot formed in “a drainage channel, the equivalent of a big vein inside the skull” that brings blood back to the heart.

Clinton’s campaign wants the public to believe this was a one-time scare – but given Clinton’s history of stretching the truth, it seems her health issues deserve a more serious look.