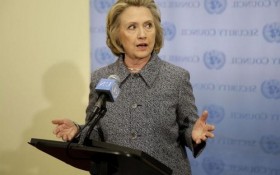 They say you can tell a lot about a person by who their friends are — but you can tell even more by reading their emails.

Hillary Clinton spent months trying to keep the contents of her private email server from being made public. And with good reason — the messages run the gamut from classified to downright embarrassing. And while potentially classified emails have not been released, The Horn dug through thousands of other, publicly available Clinton emails.

And what we found reveals a lot about Clinton’s character — and her hypocrisy.

Clinton has tried to portray herself as one of President Barack Obama’s most trusted advisers during her tenure as secretary of state. But in this June 2009 email to her top staff, Clinton admits she found out on the radio about a cabinet meeting — and wasn’t even sure she was invited.

“I heard on the radio that there is a Cabinet mtg this am,” Clinton wrote. “Is there? Can I go?”

In another email, Clinton complains about the White House changing and even canceling meetings without bothering to tell her.

Just this summer Clinton said she wanted to crack down on for-profit colleges that prey on our military veterans. But it’s clear she felt quite a bit differently when Secretary of State.

According to an August 2009 email (you can read it here), during Clinton’s first year as America’s top diplomat she worked to make sure a representative from the disreputable Laureate International Universities group got invited to a lavish private dinner party for State Department officials on education policy. Laureate is a for-profit network of universities that has been accused of taking advantage of veterans.

Writing to her chief of staff, Clinton praised Laureate as the “fastest growing college network in the world” adding that it’s a “for-profit model that should be represented.”

She also added that her husband, former President Bill Clinton, had a cozy relationship with Laureate founder Doug Becker.

Just a few months later, Bill Clinton, was named an honorary chancellor over at Laureate and collected $16 million dollars in fees from 2010-2015. Laureate also gave millions to the Clinton Foundation, and Becker personally maxed out his contributions to Clinton for her Senate campaigns.

Remember when Clinton described herself as a moderate — and promised that her presidency would be about working across the aisle respectfully with Republicans?

Well, apparently Clinton and her advisers aren’t taking that promise any more seriously than the rest of us.

In this November 2010 email, Clinton adviser and confidante Sidney Blumenthal calls former House Speaker John Boehner a lazy alcoholic (in another, he referred to the Tea Party as “swamp fever.”)

Instead of chastising Blumental for slandering Boehner and using offensive terms to describe a large bloc of American voters, Clinton sent this response:

“Thx, as always, for your insights.”

Email #4: The Clinton marriage is as frosty as ever

There’s long been speculation that the Clinton marriage is more of a power arrangement, which would explain why Hillary Clinton has stayed with her husband through numerous reported affairs.

And it looks like things are as frosty and dysfunctional as ever in the Clinton household.

In May 2009, Bill Clinton accepted a job as a United Nations envoy to Haiti, which became major global news. But he never bothered to tell his wife, America’s top diplomat.

When Hillary Clinton’s Chief of Staff Cheryl Mills got the news, she demanded an aide immediately “walk this to HRC if she is not gone.”

The Clinton camp was apparently worried she might learn about the announcement on the TV or radio — the same way she learned about cabinet meetings.

Email #5: Hillary’s email address was so secret, even Obama’s chief of staff didn’t have it

Hillary Clinton claims there was nothing covert about her use of a personal email account to handle government business. But her email address was apparently such a closely guarded secret that even President Obama’s chief of staff didn’t have it.

In this September 2009 email, Cheryl Mills emails Clinton asking whether it was OK to share the address with White House Chief of Staff Rahm Emmanuel.

As chief of staff, Emmanuel was Obama’s closest adviser, responsible for everything from coordinating his schedule to helping him advance policy. But he couldn’t have Clinton’s email address without her permission.